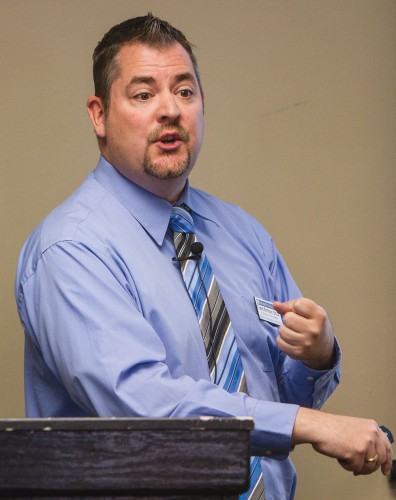 Todd Britton, assistant vice president in the Office of Information Technology, presents the findings of his dissertation “Key Considerations of Community, Scalability, Supportability, Security, and Functionality in Selecting Open-Source Software in California Universities” Monday in the President’s Dining Room. Britton used a Web-based wiki to have participants from private, non-profit California universities answer what factors were most important in each of these consideration categories. Britton’s talk was part of the weekly Faculty Lecture Series. / photo by Celine Dehban

Budget cuts at universities are causing technology leaders to look for alternate software and many education institutions are now choosing open-source software instead of commercially available off the shelf software, Britton said.

Open-source software is any computer software with its source code available for users to develop and test, resulting in a work of community collaboration. Most open-source software programs are free to obtain but the costs of implementing them and providing support are not free, Britton said.

Britton undertook the research because he wants to lower software costs for the University. He said his goal is to be sure ULV is on the cutting edge with the software used while spending as little money as possible.

“(The study was on) how as professional leaders, how can we understand the million choices of software out there and what we can do to get the right software to satisfy our needs,” Britton said.

Britton’s study is to examine the community, scalability, supportability, security and functionality of software in universities in California, focusing on private, nonprofit institutions only, so that his study is on a constrained area of interest.

Initially, 23 participants signed up for Britton’s study but only ten contributors were used at the end because many did not complete the study fully. The participants are experienced in software, with some having over 20 years of experience. A few participants work in smaller schools where there are no information technology departments, but the participants are all similar in that they all work at private nonprofit universities in California.

The data collection process involved a Web-based wiki page, an application that allows users to edit its content in a collaborative effort. Britton told the participants to post responses to questions on the wiki and they were allowed to include additional information as time passed. The posts were anonymous but Britton was able to follow through the responses by assigning different numbers to the participants.

“This can give a more crystallized information gathering mechanism,” Britton said.

The participants were able to read each other’s posts and many were in response to other posts.

“The narrative keeps getting more and more rich because the information is growing,” Britton said.

Through the wiki, participants wrote responses on the importance of community, scalability, supportability, security and functionality in software. And Britton learned that 100 percent of the study group agreed it is important to have the ability to collaborate. All the participants also agreed that security is a predominant concern.

Although open-source software may be beneficial in that a community of users is regularly checking on the code, there is a still a concern about security being compromised.

However, one participant still found open-source software safer than commercially available software. That participant wrote on the wiki page: “Rather than relying upon the vendor’s word on how secure a system is, through OSS, my team, provided they have the expertise, can open and look.”

“I think (the study) can be used as a guide and a lens to look at open-source software – what does it mean and what does it represent?” Britton said.

Britton said he will continue to do more research on open-source software.

After the lecture, faculty and students had questions – many were not familiar with open-source software.

“I like how (Britton) broke it down and he really defined how he did the study and the five elements to define the software,” Miranda Ramirez, junior kinesiology major, said.

“The five elements was really interesting,” Brittney Britt, junior creative writing major said. “I thought it was interesting for (Britton) to split it up, like scalability and especially community, which is important.”

Correction
Photographer Celine Dehban’s name was misspelled in the credits for “Baseball sweeps to first in SCIAC” (Feb. 27) and “Software choice is focus of lecture” (April 24). The Campus Times regrets the error.