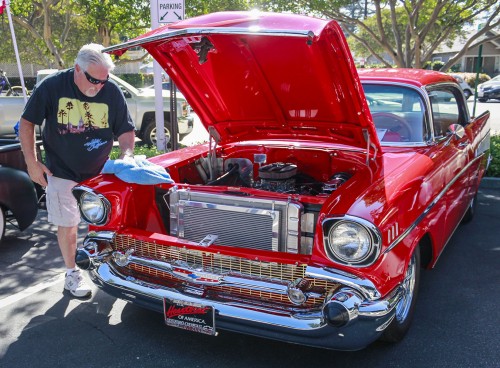 Nothing feels more like time travel than checking out old classic cars such as a 1934 Ford and a 1948 Ford deluxe convertible.

It was a step back in time at Cal-Rods Car Club’s annual Cool Cruise car show Saturday on D Street in downtown La Verne.

With more than 300 cars on display, hundreds of classic car aficionados from across Southern California poured onto D Street to check out the vintage rides.

“This part of Old Town La Verne is just so nice,” Kevin Sales, a city volunteer, said. “It’s a nice place to have a car show. That’s what makes it so popular.”

Some people wait an entire year for this event in La Verne, Clark said.

To top off the event, California-based classic rock band The Answer played cover songs by artists from past decades, like Bon Jovi and Rick Springfield.

The show featured cars of numerous makes and models.

Food vendors were also on hand for entertainment.

Cal-Rods club member Tom Bruner and his wife, Marilyn Bruner, brought their 1934 royal blue Ford to showcase at the event.

“It kind of begins the season when you can bring the cars out because the weather is good from here on out,” Tom Bruner said. “We see a lot of friends here and a lot of people we’ve met over the years. The best part is the people.”

The Bruners have been a part of the car show since it started in 1996.

“I think it’s the first nice show of the season,” Tom Bruner said.

He said he has had his blue Ford for five years, adding that it previously belonged to a good friend who died.

The Bruners said they generally take the car out only for club events, not for general use.

Ontario resident Joseph Silva said he has tried to attend every year.

“I like the way the individual owners incorporate modern technology in the cars, like power steering, power breaks, automatic transmission … and stereo systems.”

Silva has come for the past three years with his family, including his sister, niece and nephew.

Silva owned a 1953 Chevy Bel Air when he was younger but needed a newer, more reliable car at the time.

“I sold that and I wish I never did,” Silva said. “Back then I didn’t know it was going to be worth money.”

He said he thinks classic cars are exciting to learn about, and he attends car shows whenever he can.

The Cal-Rods car club was founded in 1954 by Don Scurti when he was a junior at Baldwin Park High School.

Scurti said there was a need for a club to teach young boys in the neighborhood how to work on their cars and to learn what makes them run.

The Cool Cruise car show is traditionally held on the Saturday before Easter in Old Town La Verne.

To register a classic car in next year’s show visit coolcruise.net.

One Response to Classic cars cruise into downtown La Verne