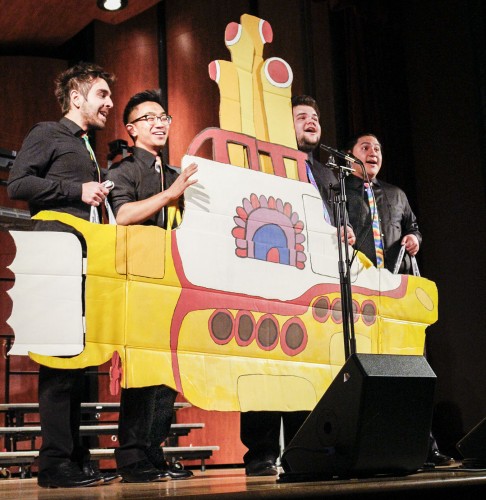 The University’s Barbershop Club side-stepped onto the stage behind a large, cardboard cut out of a replica of the most well-known yellow submarine, drawing a gust of laughter from the excited audience.

Morgan Auditorium nearly reached maximum capacity Sunday for the Barbershop Meets the Beatles event, where guests were entertained by A cappella renditions of classic Beatles hits and more.

“Here Comes the Sun” and “Lady Madonna” filled the auditorium as the chorus’ bass, alto, tenor and soprano voices hummed in tune with one another, creating layers of sound.

Carol Stephenson, a voice workshop instructor at the University and director of the Barbershop Chorus groups, hosted the event, conducted the students, offered fundraising opportunities to the guests and performed as apart of the MAJiC Touch quartet.

Stephenson said that buttons, tote bags and Mom-a-Grams, were available at the entrance with all proceedings funding the A cappella program.

Mom-a-Grams were flyers that allowed guests to sign up to receive a personalized, A cappella song delivered in person or electronically to their mother or mother figure as a Mother’s Day gift from the chorus’.

“I just realized that Mom-a-Gram sounds awfully similar to Mammogram,” Stephenson said. “But a Mom-a-Gram will be much more pleasant.”

The audience was full of energy from start to finish, applauding and laughing along with the performers. Even when Stephenson missed her note while performing”You’ve Got a Friend in Me” with her quartet, MAJiC Touch, the audience gave her encouragement with enthusiastic cheering.

“I’m sorry, I messed up; can we try that again?” Stephenson said. “That is exactly what I tell my students not to do.”

Another all-male quartet, Ideal Situation, featured Timothy May, Ernie Reyes, Ben Boughton and David Vorobyov, the president of the ULV A cappella club, singing “Blackbird” with incredible harmony that received a vigorous applause.

Summer Rahal, a senior education major, said she enjoyed the performers’ interaction with the audience.

“It was cool that they brought props out to encourage the crowd to get pumped up,” Rahal said.

Rahal said that she assumed A cappella shows were pure performance, with no engagement between the performers and the audience.

“I liked that they included us,” Rahal said. “I also feel like the soloists deserve to be talked about because they did a great job as well.”

The soloists were Zoe Meshenberg, Reanna Hilario, and Daniella Zamora, who lead “Eleanor Rigby” by the Beatles, and Ernie Reyes and Ryan Chaney, who lead the “Beatles Sunshine Medley.”

Cassandra Cabrera, a senior sociology major, said that she expected the event to be one group singing a few songs.

“I’m surprised. I don’t know why I haven’t come to these types of shows before,” Cabrera said.

The entire Third Street Sound Chorus finished the show with “All You Need is Love” and while singing; they hopped off the stage and ran into the crowd, hugging audience members who thanked them for an unforgettable performance.