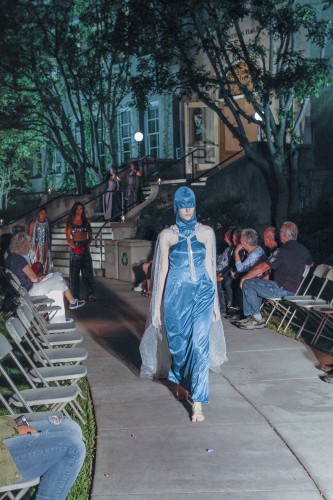 Senior theater major Michaela Bulkley leads the final walk of “A Changing Season,” an avant-garde fashion show, Friday in front of Founders Hall. Theater major Delaney Poe designed and made the pieces from scratch for her senior project. She based her theme on her own experiences with the five stages of grief: denial and isolation, anger, bargaining, depression and acceptance. / photo by Kathleen Arellano

A young woman, dressed in a black, floor length gown, stood barefoot at the entrance to Founders Hall with an embroidered black veil tightly masking her face. At the base of the steps sat another young woman dressed similarly. Between them were rows of burning candles, and all around them were rows of chairs and people, anxiously awaiting the arrival of the fashion show.

In front of Founders Hall, Delaney Poe’s “A Changing Season” fashion show caught the attention of passersby and audience members alike. The three-day show ran at 7 p.m. Friday and Saturday, and 2 p.m. Sunday.

Poe, a senior theater major, who designed the clothing for her senior project, said that she took inspiration from the five stages of grief: isolation, anger, bargaining, depression and acceptance.

“It’s forward fashion,” Poe said. “Think of Lady Gaga, she wears a lot of avant-garde. It’s not something we would wear on the street.”

Figures in blue walked out of Founders Hall through the double door entrance, descended the steps and walked back and forth across the curved path that was lined by the audience. Accessories to the models’ dresses, such as a veil or hood, kept their faces hidden in order to better symbolize the stage of isolation and loneliness. All of the models performed barefoot.

Next came anger, symbolized by two models. One was in silver, with her hands bound in red cloth. The second anger model was Karla Fuertez, a senior behavioral science major, who represented anger that is expressed outwardly rather than bottled up. Her dress was floor length and made from shimmery red sequins that caught the afternoon light as she glided down the path.

“Mainly when I am walking through the show I don’t have much emotion,” Fuertez said. “I let Delaney’s clothes do the majority of the conveying of the emotion.”

Next came the stage of bargaining, which was demonstrated by shimmery, tattered gold and silver tunics.

“I knew I wanted to do a fashion show,” Poe said. “I drew from personal experiences, and I was able to connect with the pieces. It was very therapeutic, and it was a way I could share my soul with people.”

The last models symbolized acceptance, and came out wearing green dresses with long trains that flowed elegantly behind them.

“I think it’s telling a story, so I think it is more than people sitting there and watching clothes,” Poe said.

As the fashion show came to a close all of the models came out together, and joined hands as the crowd applauded. They invited Poe to join them on the steps and she received her own round of applause. Amber Deloye, junior liberal studies major, came to the event with friends in support of Poe’s project.

“I really enjoyed it, I thought it was an interesting concept and that Delaney did a really good job,” Deloye said.

A small reception followed in the courtyard behind Founders Hall, where the models stood on display on a small stage. Poe’s “A Changing Season” fashion show raised $540 in donations to the National Stroke Association.