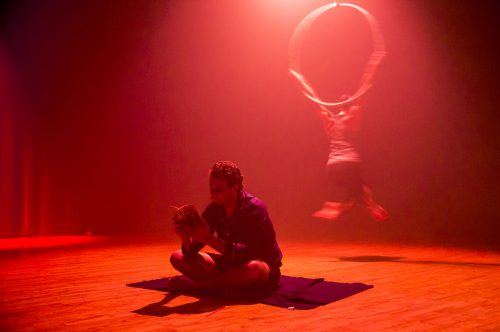 Thrill seekers awaited entry to Dailey Theatre Tuesday night as “A Living Nightmare” waited to feed upon their deepest fears.

Johnson, who was in charge of overseeing each sequence’s directors, said this type of theater gave the actors a chance to really work as artists and actors as opposed to being on stage.

Johnson guided small groups to the steps just above the large door that had to be knocked on three times to be let inside the theater.

The first sequence started inside the dimly lit theater where the stage was located.

Clear across the room sat Dante Kenway, a senior theater major and actor in the “Macbeth” excerpted piece.

Kenway made his way slowly to where groups stood but not before descending into madness, battling inner demons while realizing he committed a heinous crime.

Screams and cries turned into spine-chilling laughter as Kenway climbed up the ladder where his presumed wife laid atop a small balcony, pleading the audience to help her escape.

Shifting his focus to the group after finishing off the now lifeless woman, Kenway shouts for everyone to leave the room.

“I become that person and then it just comes out,” Kenway said when asked about how he gets into character. He added that he only needed to read the piece once over before getting the gist of his role.

Kenway’s goal after college is to become a famed voice actor, which may not be a difficult task for the talented actor.

Groups are then guided to the next sequence, a small walkway surrounded by a chaotic assortment of books and boxes accompanied by two black-draped actors softly singing the lullaby “Hush, Little Baby.”

Little contact between the actors and audience was made other than when the draped two ushered the group to the next sequence, where the fears of touch and torture await fulfillment.

A softly landed backspring started off the next sequence, with three women, two afraid for their lives and one ready to take them from them, to keep audience members on their toes.

“When you’re on stage, you become that character. You figure out their habits and their personality traits,” White said.

She added that they had less time to develop characters, so the performance was more in the moment and portrayed the characters as they were meant to be.

“It doesn’t feel like we are in character, per se, it’s like we just ‘do’,” Duran said.

Limas fixates on Duran’s arm as she picks at it, obsessing with touch and devouring flesh, while White guides the group to the next and final destination.

Dense fog with dim colored lights welcomed groups upon entry into the cabaret.

An aerialist performed acrobatics in the center of the wooden floored, circular room that allowed for an intimate setting.

One by one, dancers emerged from the heavily draped curtains surrounding the room. A calming, classical song started to play as they ascended into traditional ballet choreography.

Audience members witnessed a man dressed in a soft blue, two-piece pajama set struggle with insomnia, a fear that Johnson said many experience.

The man became frustrated with his inability to sleep as the calming music became dark and ominous as he battled the dancers, who portrayed sheep.

To conclude the piece, the dancers were overcome by the demise that some may relate to insomniac nights. The sequence ended abruptly and all became quiet inside the room, then groups were directed to exit.

Volleyball falls short against CMS
Hands off our birth control