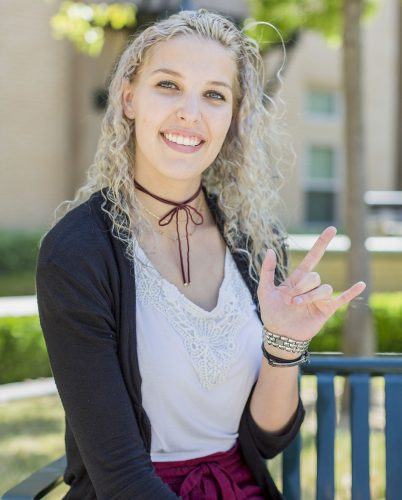 Jamie Kons, senior communications major, signs “I love you” in American Sign Language. Kons and her mother used to sign this to each other during her volleyball games. Kons plays right outside for the USA women’s deaf volleyball team. Kons and her teammates are raising money to compete in the Deaflympics this year with each player neeeding to raise $5,000. / photo by Taylor Griffith

Not even in her wildest dreams did a young Jaime Kons imagine being on her way to Samsun, Turkey to represent the U.S. Volleyball Team in the 2017 Deaflympics. The senior public relations major and computer science minor, who started playing the sport in 5th grade, still finds reality too surreal to grasp, despite having preparations underway and departure scheduled in three months.

“It wasn’t ever going to happen, it was a long shot, and then all of a sudden that one phone call just switched it all around,” Kons said. After trying out for the team two years ago, Kons made it to the developmental team.

“What that means is I can train on my own, and I don’t go with the team to any state to compete or anything like that, but if I stick with it, if I keep doing workouts on my own, staying in shape, then if anything were to happen I could join the team,” Kons said.

In January, she got the unexpected call from her coach, who is also deaf, and through an interpreter, made the official invitation for Kons to join the Deaflympic team during the summer.

“I was so excited. I was like, ‘Hell yeah, I wanna play, of course I do,’” Kons said. “Once he called me, ever since I’ve been on top of it. I started working out with the volleyball girls at La Verne, and I’m trying to practice as much as I can on my own, but I’m just so excited.”

Sophomore libero and defensive specialist Kristen Sanchez, a kineisiology major, has been one of Kons’ closest friends and workout partners. Their training includes lifting, conditioning and occasional pickup volleyball games.

“She’s very fun, she’s very outgoing, she has the sweetest personality and she’s just one of the hardest workers,” Sanchez said. “I think it’s really exciting, when she told me (about Deaflympics) I was really excited for her and I was excited that she would be joining us to train. I think it’s such a great opportunity.”

Junior business major and middle blocker Alexia Balistreri also welcomed Kons into the team’s workout, using sign language knowledge she acquired in high school to communicate with Kons, although she said they are both a little rusty. She said she is excited to watch Kons play and follow the tournament.

Kons was born deaf, a condition stemming from the lack of properly formed cochleas in her ears. Growing up, she has adapted through lip reading and hearing aids.

Apart from physical preparations to be fit, Kons is also engaged in efforts to pay for the cost of her trip to Turkey, which include airfares, logistics and apparel. She has been working as an office assistant and traffic director for Leo FM Radio on campus, in a paid internship as global sales and marketing assistant for the Rose Bowl Premium Seating, and relying on extra hours and the solidarity of family members, friends and people who have been donating to her GoFundMe account.

The USA Deaf Sports Federation requires each player to raise a total of $5000 to cover the expenses.

“My thing is, I don’t really like asking for money. I like to do it on my own. So I’m close, I got three more payments to make, and I can do it. I know I can do it,” Kons said.

“There are so many other occasions where people really need it, like cancer or someone dying, or that kind of stuff. For my mom, I made a GoFundMe account because she passed away from cancer, but we were trying to raise money so we could pay for it, getting treatment. So when I think about that scenario, I think ‘why would someone want to help me go to Turkey when there are so many things that they could put their money towards?’”

“That’s why I’ve been slightly lowkey about the funding, but it’s amazing how awesome it is to have family members and friends that are actually willing to donate. Even if it is not even that much, like if it’s $5 – that’s $5 closer to my goal.”

Kons has played volleyball her entire life. She decided to take some time off to focus on herself in college.

“I’m so thankful to have the opportunity to be a part of this again. I get such a thrill,” Kons said.

She has not yet met any of her teammates since they are spread out across different states. Before the competition starts on July 16, they will have a two-week training session to practice, bond and communicate.

“I talk a lot more than I sign. I know sign, but these girls they are just like no talk, all this cool language,” she said. “It’s so exciting, but at the same time I’m trying to learn sign language, pick it up again.”

Although the tournament will last only two weeks, it is set to leave an everlasting mark in Kons’ life and memories that will be replayed long after summer is over.

Her GoFundMe page is gofundme.com/usa-deaf-olympics, and it has so far collected $1,960 toward her goal.