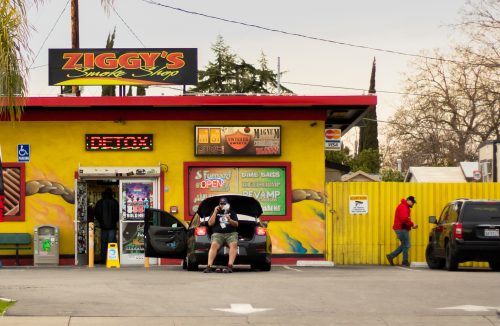 A man lights up in front of Ziggy’s Smoke Shop on Alpine Avenue in Stockton on Tuesday afternoon. A proposed referendum has delayed the implementation of a new law which would have banned the sale of flavored tobacco products at retailers like Ziggy’s throughout California. / photo by Armida Carranza

Three days after the law was signed, a proposed referendum was submitted to the attorney general of California and on Jan. 22 the 623,212 signatures needed were verified by the secretary of state, according to the Public Health Law Center. The referendum will be on the ballot this year or the next, said John Schachter, senior director of advocacy communications at Campaign for Tobacco-Free Kids.

The group that spearheaded the efforts to get the referendum passed was the California Coalition for Fairness.

“It is generally funded by the tobacco industry,” said Phillip Gardiner, co-chair of the African American Tobacco Control Leadership Council. “They spent somewhere in the neighborhood of $21 million to collect all of those signatures and putting out different lies about what it would do and what it wouldn’t do.”

Gardiner said that the amount of money backing the California Coalition for Fairness made it impossible to block the referendum.

Schachter is in agreement with Gardiner.

Gardiner said he hopes the law will be passed by the voters come the next general election. California would join Massachusetts as the only two states to ban the sale of flavored tobacco products if the measure is passed.

“If you don’t do that you have to realize that half the people that use cigarettes die from them and African Americans disproportionately use menthol products and die disproportionately from tobacco related diseases. That’s what is to be expected if the law is not passed,” Gardiner said. “They are always talking about unintended consequences, let’s be clear, the intended consequences are that they have to replace smokers each year because half of them are dying.”

Schachter still believes that the bill will be passed by the voters. He pointed to the fact that the law passed both houses of the legislature overwhelmingly and that polling shows the public’s support of getting rid of flavored tobacco products.

However he is still wary of big tobacco companies.

“We are hopeful, but we also know that when big tobacco’s profits are threatened they will spend millions of dollars to protect it with disinformation, lies, and exaggeration,” said Schachter.

Schachter said that the passing of the law would do great things for the health of kids, and it’s going to save lives along with health care dollars.

Even if the law is not passed Schachter does not believe that it will deter other states from creating the same legislation.

“Fortunately many other states don’t have public referendums to overturn state laws so we are hopeful. We are going to keep fighting at the federal level and at the state and local level,” said Schachter.

The law would prohibit tobacco retailers or any of the tobacco retailers’ employees from selling, offering for sale, or possessing with the intent to sell a flavored tobacco product or a tobacco flavor enhancer. This includes menthol cigarettes, one of the most popular flavors.

The referendum will be available on the ballot during the next general election.