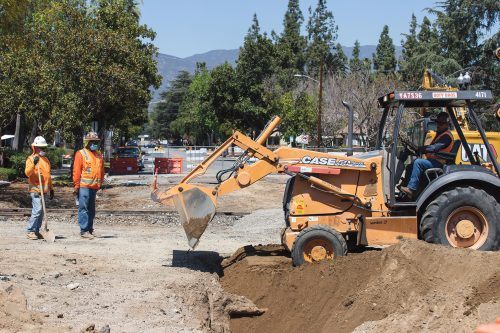 Construction workers Miguel Mata, Terry Washington and Jesse Hutcherson work on the Metro L Line track crossing on E Street on Monday. The rail project will extend from Pasadena to Montclair, and the La Verne station is scheduled to open in 2025. In conjunction with the station, the city of La Verne is planning an expansion of its downtown district to include additional shops, apartments and a hotel. / photo by Melody Blazauskas

The city of La Verne is currently working on a project of new retail and residential units that, along with a new commuter rail station, is expected to bring new business and visitors to the city and the University of La Verne.

Candice Bowcock, principal planner for the city of La Verne, said the Old Town La Verne Specific Plan was developed with the ongoing Metro L Line – formerly known as the Foothill Gold Line – extension in mind. The extension will expand the commuter rail service from Pasadena to Montclair. The La Verne station, located at E Street and Arrow Highway, is on track to open in 2025.

The Specific Plan includes funding for an expansion of the downtown business district along First Street, adjacent to the new station, that would include 1,700 residential units, over 100,000 square feet of retail space and a 150-bed hotel.

Bowcock said both the L Line and the Old Town La Verne Specific Plan would bring more people to the city, and the expected development in the Old Town area could lead to more retail, work/live units and possibly a hotel.

“More tourism for sure, that La Verne doesn’t necessarily get today,” said Bowcock.

Bowcock said as far as she knows, both the University and the city are in support of the Metro L Line.

One attention grabbing scenario to come out of the L Line development was when Linda Lockhart Wilkinson, a La Verne resident, personally financed the relocation of her 109-year-old house, situated on the corner of First Street and White Avenue, to make room for the new retail district.

Bowcock said the house was determined to not be historic by both a historian consultant on staff and a third party historian, meaning it could not receive a historical preservation designation that would save it from being uprooted by the development. Rather than see the house destroyed, Wilkinson paid to move the house down the street to the corner of First Street and F Street.

Bowcock said that the city has a vested interest in preserving the historical neighborhoods and other aspects of La Verne.

For instance, the exterior of a historic packing house on First Street will be maintained while transforming the interior to accommodate new restaurants and retail establishments.

“The packing house holds significance because La Verne used to be an orange grove and it is part of La Verne history,” Bowcock said.

Bowcock said the city has received mixed reactions from La Verne residents. There are people who do not want all the troubles that come with development, like traffic and people. While others support the plan and are excited to see the city grow.

Jason Miller, associate vice president of capital planning, facilities, and space management at the University of La Verne, said the University does not have an active role in the development project or the L Line itself, but that will bring some changes to the south part of campus for both pedestrians and drivers.

“We just share our desires and make sure they can incorporate it,” said Miller. “They just want to be good neighbors and look out for our interests as well.”

Miller said the city has instead approached the University for their opinion on having a L Line station right at its back door. He said the school’s main concern was traffic and the impact it would have on parking and safe pedestrian access.

“Since we have people walking all across campus, crossing streets, safety was our top priority,” said Miller. “They have addressed a lot of the school’s issues for all crossings.”

Miller said there will be vehicle gates and pedestrian gates put in place at all crossings. He said the pedestrian gates were very important for many reasons. For one, it would prevent people from crossing the street when they are not paying attention. Secondly, it gives more awareness to pedestrians because the trains will be electric.

On D Street, because of the access to the parking structure one concern the University had was the left turn into the parking structure being backed up onto the tracks. Miller said the city, through traffic studies, showed the University would have to close off that connection and the pedestrian crossing between the corner of Vista La Verne and the Arts and Communications Building.

“There is going to be a median built up to Leo Hall with a fence in the middle that will prevent people from trying to cross the road and getting hit,” said Miller.

Miller said this will reroute pedestrians to a safe crossing at the tracks or up to Second Street.

Bowcock said the first nine-mile segment from Glendora to Pomona will be completed in 2025 and include stations in Glendora, San Dimas, La Verne and Pomona. If an additional $450 million in funding is secured by October 2021, Metro will build the entire project to Montclair by 2028. Once the construction is complete, the project will be turned over to Los Angeles County Metro to conduct pre-revenue service. Metro will determine when passenger service will begin.