By David Rafael Gonzalez, Litsy Tellez on October 29, 2021 in News 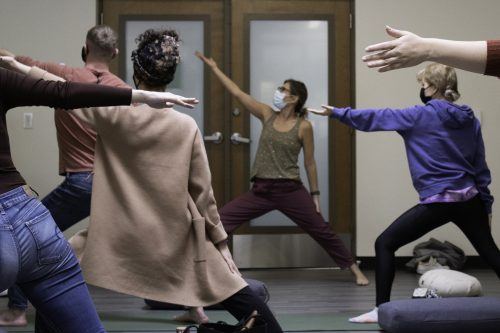 Amy Demyan, professor of psychology, leads a yoga demonstration as part of the weekly faculty lecture series Tuesday in the Lewis Center. Throughout the demonstration, Demyan shared the benefits of yoga therapy when facing stressful times. / photo by Litsy Tellez

Amy Demyan, professor of psychology, talked about the benefits of yoga and guided an audience of 25 students and faculty through a yoga session on Tuesday in the Lewis Center.

Demyan said that she wanted to do something different for her presentation in the weekly faculty lecture series to match what she did during her sabbatical.

“Everyone goes on their sabbatical and they do research,” Demyan said. “I went on my sabbatical and I became an advanced yoga practitioner, so I thought I needed to show them what I learned and this was the best way to do it.”

“The presentations most people give, people are talking and are thinking and we’re learning words in the front of the brain, but we’re not actually changing how we feel in the body and the reactive patterns that we’ve developed over time,” Demyan said. “And so this is a way to make the body feel safe or better.”

When she first went on sabbatical for her advanced yoga training, Demyan said she had a few questions that she sought to answer, mainly whether yoga stills the mind and if so what are the benefits. Demyan defined yoga as the stilling of the fluctuations of the mind.

“Yoga tries or aims to make us feel safe in the body by stilling the fluctuations of the mind, getting us out of the front of the brain, and getting us into the body and body wisdom that we’re all born with,” Demyan said.

Demyan said that body wisdom is something that everyone inherits from their ancestors. Part of this body wisdom includes a person’s fight or flight response that may come up in different situations.

“Unfortunately as children, a lot of times our body wisdom is cut off,” Demyan said. “When you’re a little kid and you’re hungry, your parents may say to you ‘No, it’s not dinner yet” or ‘Don’t eat that, you’re gonna spoil your dinner” or ‘Just a little longer. We’ll stop at that next exit.’”

Demyan said as those situations continue, a person’s body wisdom may shut off because it is not being listened to. Doing away with someone’s body wisdom can also come with feelings of thinking one’s thoughts are not their own, she said.

Throughout the session, Demyan pointed to research on the benefits of yoga. In one of the studies, it was found that focused attention was an important aspect of yoga, Demyan said.

“We need to be able to focus our attention on the present moment to be in the moment,” Demyan said. “And as the thoughts come up, we identify those and we send them on our way.”

Demyan said that one research study found a 27% increase in gamma-Aminobutyric acid, or GABA, which is an inhibitory neuron.

“When the fight or flight response wants to get going, GABA steps in and says ‘nah we’re good,’” Demyan said. “So just after this practice today, you may have increased your GABA almost up to 30%.”

“It was very calming,” Habib said. “It was a lot more structured than I had anticipated.”

Brent Blumenthal, a clinical psychology graduate student, said that it reminded him of mindful meditation.

“For me, especially towards the end, it was kind of making me feel kind of sleepy,” Blumenthal said. “Like the guard almost comes down a little bit and makes you feel really relaxed.”

Al Clark, professor of humanities, said that the style in which Demyan presented was wonderful and could open up possibilities in other fields like dance or theater.

“It’s helpful to do the mind, body activity and particularly this because it’s using your mind to get your body to act in a way that is different than you usually perceive,” Clark said. “It was extremely well done, it was fun, it was educational.”

Clark said that even though he was not able to fully immerse himself in the experience, he still felt the benefits of the yoga session.

“It did help clear my mind,” Clark said. “It certainly got all those muscles and all those joints, I felt every one of them and was pleased to be able to do so. And it was so calming.”