Gyasmine George, assistant professor of educational counseling, talked about her research on what it means to be an activist at the weekly faculty lecture on Nov. 23 via WebEx.

George started her presentation by giving her own background as an activist. She said she attributes her position as an activist to her parents, who she said were activists. Her mother was an activist through love as a teacher in the Los Angeles Unified School District for 37 years and her father was a member of the Black Panther Party for Self-Defense.

“Anything that I do I dedicate to my parents, who are no longer with me, but they were activists,” George said. “I’m a child of activists.”

She said her activism was expanded after going to South Africa as part of her Ph.D. program and going on the African American Footsteps to Freedom tour.

“Just being that close to history I was forever changed and forever altered,” George said. “I came back home really challenging myself, ‘how dare I come home and stay the same and mediocre.”

After her dissertation on the lived experience of Black college athlete activists in times of racial and injustice, she started working on what she calls the Activism Growth Model.

“I wanted to build something for people for those who wanted to lean boldly into their activism but weren’t sure how,” George said.

The Activism Growth Model was based on several academic theories and works, including critical race theory, Black feminist thought and Maslow’s hierarchy of needs, and on studies she started conducting in 2019.

The Activism Growth Model starts with beginning your soul work, knowing your roles, choosing your vehicles, finding your people, locating the barriers, practicing radical compassion and ends with changing the world.

“You’re the architect, good people,” she said. “I feel that everyone is wired for this work and when you figure out your role, it is the most beautiful thing that anyone can ask for. You’re operating in your calling for activism and advocacy.”

She said there are three roles: agitators, reformers and change agents. Agitators are nonviolent and prevent society from ignoring a violation of widely-held values. Reformers work within official structures to find solutions. Change agents actively oppose policies and work to educate and involve the general public.

There were four different vehicles of activism that came up during the research: scholarly, grassroots, symbolic and public displays. She said that this lecture was an example of a scholarly vehicle of activism.

“I’m doing it right now. I am so privileged and blessed to be a faculty member here at La Verne as an alum to be able to share my labor of love to hopefully educate and empower folks,” she said. “You’re contributing and breaking barriers and boundaries on the academic sphere.”

George said that forming a support system is important to sustain your advocacy because it is necessary to break down barriers, which is the next step in the Activism Growth Model.

“When there are people or other systems fighting for equity and equality, it feels like oppression to them,” George said.

At the end, George stressed the importance of practicing radical compassion.

“Taking care of yourself must be radical as you step boldly into your activism and advocacy,” she said. “I call it radical because it is crucial to be able to resist oppression and injustice. They’re coming from everywhere, including within yourself.”

Al Clark, professor of humanities, thanked George for the lecture and that she has modeled the Activism Growth Model throughout the talk.

“You’ve certainly shown us how it can be done today,” Clark said. “It would be wonderful if that were the social model for society, not just the classroom and our campuses.”

Esilanna McMenamin, senior political science and speech communication major, said that the lecture encouraged reflection. She said that even though she considers herself an activist and an advocate, there are times where she should have been more active.

David Rafael Gonzalez is a senior journalism major and LV Life editor of the Campus Times. He has been a three-time editor-in-chief and has also served as editorial director, LV Life editor and a staff writer. 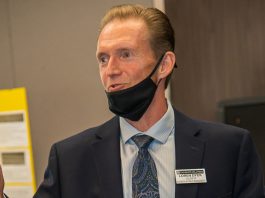 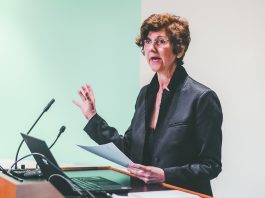 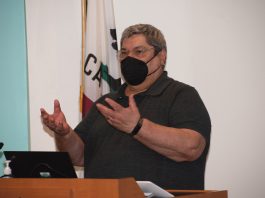