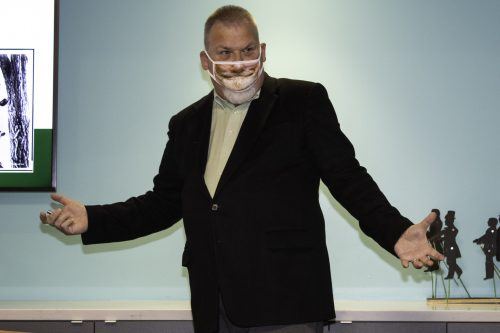 Sean Dillon, professor of theater arts, explained the journey of producing “An Enemy of the People,” a play put on by the theater department in May, and the complications that came because of the pandemic on Tuesday at the weekly faculty lecture in the Executive Board Room.

In the lecture, which was attended by 20 people, Dillon said that the play, “An Enemy of the People” tells the story of the effects of global climate change and environmental disasters. The play follows a man who tries to warn the town of water pollution causing sickness, but the town does not listen to the science.

When choosing the play, Dillon took into consideration a few things: the type of play, the resources he had and the topical relevance of the play.

“That’s the context in which we saw it and thought contemporary audiences could certainly identify with that,” Dillon said.

After choosing the version of the play, he started deciding on the production concept, including the style, design, themes and casting of the play. He settled on a realistic setting and realistic acting.

“The themes of the play would be, hopefully, communicated without beating the audience over the head,” Dillon said. “Our hope was that the audience would watch the play and draw their own conclusions and connections with the material.”

Rehearsals were then under way with a read through of the material with the cast, but in the middle of rehearsals, the COVID-19 pandemic hit and put a halt on production, Dillon said.

“It wasn’t until the new year, until 2021, that we realized if we’re going to do this, and most people were on board with doing it, then we’re going to need to reimagine the production in a way that could be performed without us all getting together in the way that we were used to,” Dillon said.

He thought of making the play either a Zoom, audio or radio production, but it did not feel right. After finding inspiration from Wayang Kulit, a traditional Indonesian shadow puppet performance, German film director Lotte Reininger and the theater company Manual Cinema, he decided to have the play performed through shadow puppetry.

These shadow puppets were created with photos of the actors as reference and were cut out using a Cricut machine.

Dillon said that most of the original cast wanted to go through with the new version of the play. After recasting a few of the parts, the actors started recording their own parts while remote and recording the shadow puppet parts.

After everything was recorded, Dillon edited everything together using programs like Adobe Photoshop, Adobe Premiere Pro and Adobe Audition.

“Essentially we were doing a production from post production,” Dillon said.

“When you have nobody ever being in the same room together, you end up with something like this,” Dillon said.

Bree Douglas, junior political science major, said that the production of the play was a journey of perseverance.

“His passion alone, the way he resonated with this play, I’m sure it would’ve still been phenomenal,” Douglas said. “The fact that the pandemic basically hindered the whole process and he still found a way to rise above it, that was the most interesting thing to me.”

Esilanna McMenamin, senior political science and speech communications major, said that she thought about the topical relevance of the play and how Dillon related it to COVID-19. McMenamin said that it also reminded her of broader problems throughout the United States.

“It made me think of a lot of issues regarding water pollution across the United States, such as in Flint, Michigan or in Belmont, Michigan,” McMenamin said. “There’s a lot of health crises that involve capitalism, corporate manipulation of the public and people never knowing that they are experiencing or affected by the toxic waste.”

McMenamin also noted that the shadow puppetry involved in the play was also interesting and related it to popular media today.