By David Rafael Gonzalez, Litsy Tellez on November 19, 2021 in News 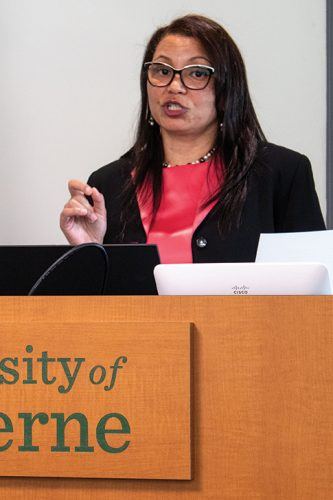 Kimberly White-Smith, dean of the LaFetra College of Education, lectures about her research Tuesday in the Quay Davis Executive Board Room. White-Smith’s research centers on the experiences of Black women in higher education who have faced inequality in their careers while their children have also faced inequality in the school system. The talk was part of the weekly faculty lecture series. / photo by Litsy Tellez

Kimberly White-Smith, dean of the LaFetra College of Education, talked about her findings on the experiences of Black mother scholars in education on Tuesday at the weekly faculty lecture.

As part of a collaboration for an upcoming book, White-Smith gathered data over the course of a year from 10 Black mothers in higher education, including three professors, an assistant professor, a dean and an assistant dean. She focused on six of the participants’ experiences during the lecture.

“For many of them, they happened upon this realization of race,” White-Smith said. “It was something that they could not escape; it was part of their educational process.”

When it came to the participants’ experiences as mothers of students in the school system, there was a theme of a protective advocate.

“As mothers, the participants were naturally compelled to protect their child and advocate for their educational attainment,” White-Smith said. “This was exacerbated by the intersectionality of race, class gender geography and moreover by anti-Black encounters.”

White-Smith said one of the participants had to call the school to correct her son’s grades after being falsely changed. This participant said that she always had to be on top of things because she did not trust teachers.

“I want to remind you that this is a teacher-educator, and this has been their experience,” White-Smith said.

“The academy is a racialized bastion that marginalizes, ostracizes and minimizes the beings and contributions of Black women, which can adversely affect physical health,” White-Smith said.

She said that when asked how the participants survived, they all responded with affirming restorative habits of mind.

Using the data, White-Smith began the framework for what she currently calls the Black Mama Generation Resistance Theory. While still in development, this theory starts with survival, protection, assertion, and ending in what she calls womanifestation.

As part of survival, White-Smith said that Black mothers tend to follow cultural scripts that generations have passed down.

She said that Black mothers have had to protect their families in ways that would be unrecognizable to someone viewing it from a white normative perspective.

“Black women historically have protected ourselves, family, children emotionally, physically, educationally against a society that constantly tries to decimate us,” White-Smith said.

This cycle eventually leads to what White-Smith calls womanifestation, which is the intentional development of joy.

White-Smith said that this research is not meant to be generalized, but using the women’s experiences in the study can offer a lens to the challenges Black women face in the academy.

Al Clark, professor of humanities, wondered how White-Smith’s own experiences fit into the research.

“You’ve made it very clear both in your research and in your own environment that there was this protection of ‘You don’t talk back’ and ‘You don’t do this,’ but then you emphasized that Berkely made you just the opposite,” Clark said. “How did that impact you personally?”

White-Smith said that even though her parents practiced restrictive parenting, her mother intended to break the cycle.

“So going back to this idea of fear, fear for your child to repeat or become part of a cycle that you know won’t benefit from really fed into this idea of restrictive parental practices,” White-Smith said.

She said that her experience in Catholic school was the opposite of that, which helped her see herself as smart. This became a protective factor when applying for college.