The University of La Verne baseball team rebounded from a 0-3 weekend with a 6-5 win over Concordia University Tuesday evening.

With the score tied 1-1 after the first inning, the Leopards put one more run on the board in the bottom of the third inning for a short-lived lead at 2-1.

The Eagles responded with two runs in the top of the fourth inning and two in the sixth, achieving a 5-2 lead.

In the eighth inning, the Leopards made a comeback, scoring three runs to tie the score, 5-5.

ULV brought the winning run across the plate in the bottom of the ninth inning, ending the game 6-5. Outfielder Ray Podesta recorded the game-winning RBI with no outs in the inning to claim the game for the Leopards.

“We were in a similar situation against Chapman, and we ended up losing,” said Alan Sarrail, pitcher. “It was good right after that loss to come back and get a victory in the same situation.”

The final game of the series Saturday night at Hart Park in Orange was the closest of the three games between the two teams, as the Leopards saw their chance to win taken back in extra innings.

The game was scoreless through the fourth inning, but ULV found their swings in the top of the fifth and put the first two runs on the board. Leading off was first baseman James Ortega with a single past second base.

A single to left field from outfielder Joe Garcia drove Ortega in on the hit. Ortega then scored on a Chapman fielding error off a hit from third baseman Adrian Reyes.

The Leopards increased their lead to 4-0 with two more runs in the top of the eighth inning. With one out and runners at first and second, outfielder Daniel Soriano singled to the left-center gap and brought one run across the plate.

Designated hitter Aaron Mendoza brought in the second run on a sacrifice fly to right field.

Chapman responded in the bottom of the eighth with three runs to bring the score to 4-3. The Panthers loaded the bases with two singles and a walk. Designated hitter Brian Brubaker doubled to right-center, scoring two.

A fielder’s choice brought in the third run.

In the bottom of the ninth, the Panthers squeezed out one more run to tie the game. With two outs, and two strikes, catcher Matt Graves sent a single shot to center field, allowing the tying run to cross the plate.

“They’re a confident hitting team, especially with two strikes,” Winterburn said. “When you put the ball in play with two strikes at this level, you put people on base and make things happen.”

With the score tied in the bottom of the ninth, the game was forced into a tenth inning. It was three up, three down for the Leopards, but Chapman was more successful.

Three consecutive singles loaded the bases for the Panthers.

A sacrifice fly from infielder Justin Hallenbeck then brought in the winning run. One run was all Chapman needed to finish the game and claim the win in a come-from-behind victory, 5-4.

“We played aggressive with nothing to lose, but we fell short of closing it out,” Winterburn said.

Friday afternoon’s game at Ben Hines Field saw Chapman jumping on a 4-0 lead early in the first inning. ULV could only put up one run in the bottom of the first, scoring on a Chapman fielding error.

The Panthers drove in two more runs in the top of the fourth inning, increasing their lead to 6-1.

Leading off for the Leopards in the bottom of the fourth was Soriano, who hit a homerun to bring ULV one run closer to Chapman. But once again, the Leopards scored only one run.

In the top of the seventh, Chapman gained one more run in their favor, but could not score for the remainder of the game.

ULV put their final two runs on the board in the eighth inning with a double from Ortega that knocked in the runs.

The game ended with the Panthers on top, 7-4.

The Leopards had runners at the corners in the top of the fifth. Soriano singled to left field, followed by a double to left field from Mendoza, each bringing in one run – ULV’s only runs in the game.

“Hitting-wise, we still have a ways to go to get to where we want to be,” Ortega said. “Good things happen when you put the ball in play.”

Chapman continued to rack up the runs with one run in the sixth and seventh innings and two in the eighth, for a final score of 9-2.

“I was encouraged by the fact that I think the team got better as the series went on,” Winterburn said.

Three wins over the Leopards increased Chapman’s winning streak to 10 games and their record to 18-5.

ULV is now 7-16 on the season, holding a seventh-place standing and a 2-7 record in the Southern California Intercollegiate Athletic Conference.

The Leopards return to conference play this weekend. They take on the University of Redlands at 3 p.m., today in Redlands, and they play a doubleheader against the Bulldogs at 11 a.m. tomorrow at Ben Hines Field.

“Redlands has a solid club,” Winterburn said. “It will be another tough series; there’s no rest for ULV. If we are ready mentally, our team will be fine.”

Redlands, with a 7-2 SCIAC record, is in a three-way tie for first place in the conference with Claremont and Cal Lutheran. 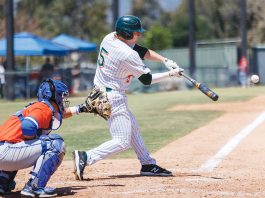