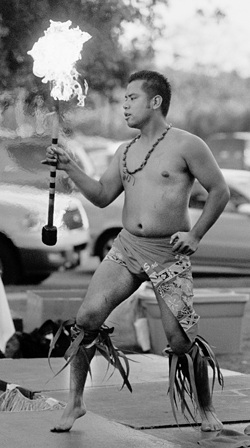 With a fire extinguisher on hand, Kanaka Hui Ohana entertained the University of La Verne community at its annual Hawaiian Club Lu’au with fire knife dancer Alika Soriano of the Polynesian Paradise Dancers. Members of Kanaka Hui Ohana quickly attended to the small fires Soriano started during his short appearance on stage. / photo by Chrissy Zehrbach

Kady Bell
Staff Writer Students and faculty members were greeted with colorful leis and invited to sit down, dine on Hawaiian cuisine and soak up the light and breezy island atmosphere at the annual lu’au held by Kanaka Hui Ohana, the University of La Verne’s Hawaiian club, on May 12 in the University Mall.

The annual end-of-the-year lu’au dates back to the beginnings of KHO in 1983, and even though it has not been held consecutively over the years, the goals of the event have remained the same.

Shane Rodrigues, advisor of KHO, said the celebration was meant to be both educational and festive, ending the year with a bang.

“The purpose of the lu’au is to share the Hawaiian/Asian/ Pacific Islander culture with the ULV community and to have one, last fun time where people can eat, drink and have some fun before school’s out,” Rodrigues said.

“The lu’au is a major event that is celebrated in Hawaii, and the club wanted to share this experience from a ULV perspective,” Kapono Kobylanski, KHO webmaster and former president, added.

The night never failed to be anything less than lively, as entertainment ranged from the musical stylings of Something Simple to a performance by the Polynesian Paradise Dancers and a Tahitian Fire Knife Dance.

The Polynesian Paradise Dancers, who were also featured at last year’s luau, were brought back by popular demand and provided laughs and a free hula lesson for selected volunteers, in addition to entertaining the audience with their own choreographed hula dances.

They brought up students in the crowd, even pulling a professor onto the stage, gave them all grass skirts to tie around their waists and said, “Let’s shake off this food.” Volunteers were then told to pump their hips to the left when they heard the word “coconuts,” to the back when they heard “pineapple,” to the right when they heard “mango,” and to the front when they heard “kiwi,” making for an impromptu but entertaining demonstration.

Matt Cordova, a freshman criminology major who was on hand to volunteer for the free hula lesson given by the Polynesian Paradise Dancers, said the event had measured up to his previous lu’au experiences.

“I got up there with some friends and had fun,” Cordova said, in between bites of pineapple chunks. “It was a good, fun event for family and friends to get together.”

Prizes were also awarded to 50 cent raffle ticket owners throughout the night while students and faculty feasted on a dinner of traditional Hawaiian foods such as Kalua, roasted pig, sticky white rice, stir-fried vegetables and Haupia, iced coconut cake, for dessert.

Proceeds from the raffle and from photos taken of students behind a Hawaiian scene cutout, which sold for $1 per two students, went to Friends of Hawaii, Inc., the same non-profit organization that KHO members chose to donate to last year. 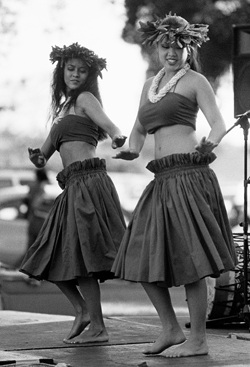 Bringing authentic Hawaiian island dancing to Hanaka Hui Ohana’s annual lu’au were Akemi Welsh and Marissa Chee of the Polynesian Paradise dancers, a group based out of Downey. The group also performed for the movie premieres of “50 First Dates” and “Lilo and Stitch.” This annual event dates back to 1983. / photo by Chrissy Zehrbach

“We wanted to donate money to a cause that would benefit a lot of people,” Kobylanski said. “The organization we chose does exactly that; it benefits women, children, youth, and the needy.”

Perfect weather also contributed to the island atmosphere and students seemed to enjoy themselves as they talked and laughed, ate and drank, and absorbed the overall mood of the lu’au, which the program said was meant to be “casual, informal and abounding in merriment.”

Students got up for second and third helpings and said the Hawaiian meal and ambience was a nice change of pace from the typical humdrum provided by the food at Davenport Dining Hall.

“The chicken and the rice were really good and the best part of the coconut cake was the icing,” Janelle Daniel, a sophomore political science major, said.

Kobyklanski and Rodrigues also said the lu’au had continually improved, as club members attempt to out do themselves year-by-year.

“This year, the lu’au was another success with the Polynesian Paradise Dancers performing again, onolicious food provided by Davenport and a lot of people,” Kobylanski said.

This year Kobylanski handed over the leadership reins to Alain Karet, co-president of KHO, putting him in charge of planning the event.

“After the lu’au, he told me, ‘I hope I did a good job by your standards,’ and my reply was something to the extent of ‘You did a great job, thank you, and I look forward to seeing what you do with the lu’au next year,’” Kobylanski said.

Eleni Soakai, a senior broadcasting major and member of KHO for the past four years, said she was not surprised by the event’s success.

“Every year it’s successful; the sponsors, the turnout and keeping the crowd entertained,” Soaki said.

In fact, the only uttered complaint was that the amount of people in attendance outnumbered the amount of available tables and chairs, making seating a difficult situation.

“The food was really good, but there wasn’t enough chairs,” said Deonne McLean, a junior sociology major who stopped by the lu’au in between track practice and a 6:30 class.

“It was soothing and relaxing at this time of the afternoon, though,” McLean added.

C’est la vie; seize the road
On the Calendar