By Amy Babin, Chrissy Zehrbach on November 14, 2003 in Hockey, Sports 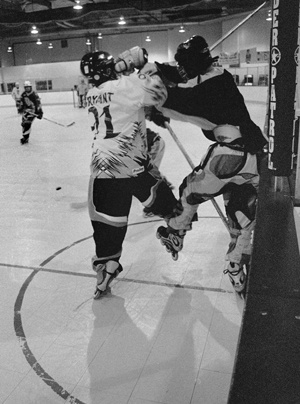 The La Verne Hockey Club, together with the city of La Verne, offers a roller hockey club for the community. Local high schools and colleges compete in the club’s Puddingstone Drive facility, as well as civic youth and adult recreational teams. In the youth Bantam Club Nick Bryant (No. 91), from Top Shelf, and Philip Neilson (No. 19), from Flock of Seagulls, fought for the puck in their first game of the winter season. The club is supported by La Verne tax dollars. / photo by Amy Babin

The La Verne Hockey Club opened its doors Sept. 30, 2000, and has been struggling ever since to keep them open.

The former Gretzky Roller Hockey Rink is not as popular as its creators had anticipated it would be.

Yet it continues to cost the city $24,000 a month to keep the club going because it does not meet revenue expectations that it anticipated to make it through registration fees paid by the sports teams who play there.

According to Bill Aguirre, director of Parks and Community Services, this money comes from the city funds allocated for all athletic and recreational programs in La Verne.

The club is moving into its fourth year under an eight-year lease with the city.

“We are providing a service for the community,” Aguirre said.

In May, a $120,000 budget amendment was approved to help the club get back up on its feet.

New management was also hired in June to revive the club.

This was the second management change that occurred during the past year.

Kevin Nash is the new general manager of the 44,000-square foot hockey club and all its programs.

He moved his family from San Diego to take the job.

“It’s been challenging, but we did it because this is something we wanted to make happen,” Nash said.

Participation in programs at the club has dropped in recent years.

“It used to be very busy, very packed,” said Jacob Leveton, a University of La Verne junior who used to participate in the programs and referee games at the La Verne Hockey Club.

An example of the drop-off in interest, Leveton has not played at the club in over a year.

“There are 80 teams for fall. (Kevin is) doing a fantastic job, and the facility is looking better than its ever looked,” Aguirre said.

The club is still looking to expand its programs to bring in a larger pool of participants and spectators.

“The next thing I want to do is appeal to more colleges,” Nash said. “There are lots in the area, it’s really a lot of recruiting,” he added.

Cal Poly Pomona currently has a club team that plays at the La Verne Hockey Club, but it is one of few schools to put together a program.

“From what I understand, they’re concerned with liability,” Nash added.

There has been talk in the past of an official university hockey club, according Leveton.

But the organization of such a club lacked sufficient support at the university and has since been dropped.