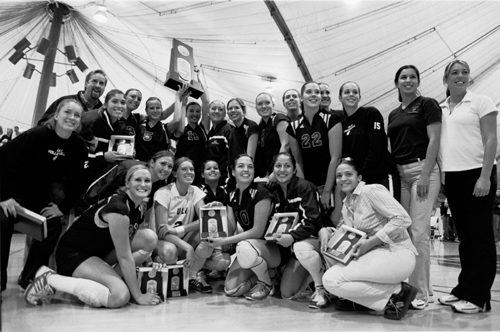 The University of La Verne women’s volleyball team finishes its 2003 season as the No. 3 NCAA Division III team in the nation. / photo by Adam Omernik

After a semifinal letdown to second-ranked Washington (Mo.) University, the University of La Verne women’s volleyball team rode a 3-0 victory over Emory University to a third-place national finish Saturday night in the Supertents.

As the Leopards were presented with their third-place trophy, the three senior captains hoisted it over their heads with smiles on their faces. 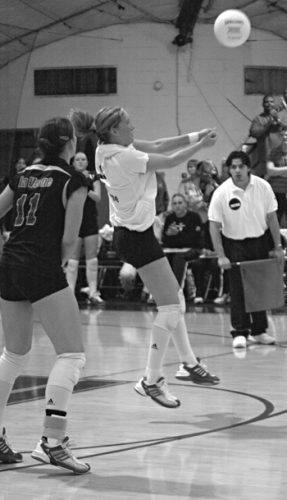 “It’s been a wonderful four years for all three of us; we’re starting to really enjoy the things in life a lot of us can look back on,” said senior Amy Smith.

“I’m lucky to be here and have this opportunity. I wanted to do whatever I could and end on a win,” said senior Lisa Mila, who came out swinging in the third game against Emory, recording five kills. “It’s my last season. I wanted to make the best of it.”

The Emory match was the perfect way to end the season. With all said and done, the team was glad to conclude their season with a win.

“Thinking about the loss, I can only think of one thing that would have made it worse; that is if it were our last match,” Smith said.

“There’s a real balance of the pain of last night and the opportunity to finish the season in the correct fashion,” Head Coach Don Flora said.

“I have a ton of respect for their program,” Emory head coach Jennifer McDowell said. “They did what they needed to do tonight.” 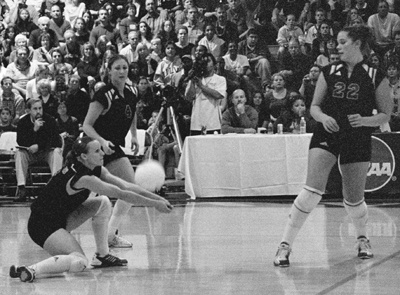 Amy Smith, ULV outside hitter, got down for the defensive dig to return the ball in the game against Washington. ULV lost the match, 3-0, in the semifinals of the NCAA Division III Women’s Volleyball National Championship Tournament. The Bears advanced to win the National Title. / photo by Amy Babin

“It was a heartbreaker losing in five yesterday. That took a lot out of us. I thought we would do a lot better,” McDowell said.

The Leopards were also looking for an outlet for their Friday night loss at the hands of Washington, 3-0 (27-30, 27-30, 25-30), when they were forced to relinquish hopes of a national championship.

“At this point if it’s meant to be, it’s meant to be; I guess it wasn’t our year to win,” said junior Amy Kratochvil.
Against Emory, the Leopards did not seem ready to play at the start of the game one, but picked up their intensity and spirits as the match continued.

Both teams were held to low hitting percentages in the match. ULV and Emory hit .179 and .133, respectively. 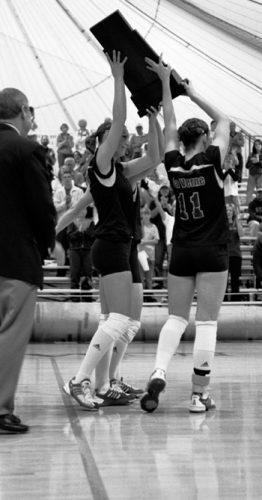 On defense, Smith, the American Volleyball Coaches Association Player of the Year, recorded the match-high 14 digs. ULV’s team total was 55 digs – 10 more than its opponent.

“I really thought La Verne would be playing tonight, not to take anything away from Washington, but that’s how good I really think they are,” McDowell said.

But the two teams who competed for the title Saturday night were NYU and Washington. Washington walked away with the win, 3-0 (30-26, 32-30, 30-22), claiming their record eighth NCAA title. Washington ended its season on a 28-match winning streak.

“We had been training for 13 days looking for Washington and not looking ahead,” Flora said.

ULV experienced its first 3-0 loss of the season Friday night against Washington. The Leopards had only lost twice during the season, and both had been 3-2 losses. It was a surprise for everyone for the team to get swept.

“I’m amazed we didn’t get it done,” Flora said.

The Bears had a .257 hitting percentage in the match and held the Leopards to only .188. Kratochvil led her team with 10 kills. Smith and Schary each contributed nine. 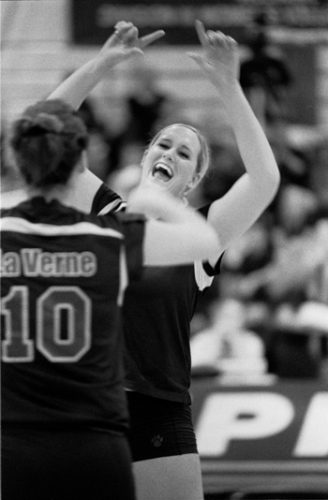 Junior middle blocker Tricia Schary shows her excitement after every point and keeps her team charged up with her high energy. The team started the game against Emory flat due to their loss to Washington the previous night, but as the game continued, the Leopards’ excitement heightened. / photo by Adam Omernik

“They played hard and we didn’t play to our potential,” Schary said.

A major component in the match was Washington’s ability to block ULV’s attacks.

“They’re a great blocking team. We had a tough time getting around the block and when we did, their defense stepped up,” Smith said. “We didn’t do the little things tonight and they did.”

“La Verne has a great team, but I don’t think they have really faced a team that blocked as well as we did,” said Washington head coach Rich Luenemann. “We were prepared for those options they were going to run.”

Although they were outblocked in the game, the Leopards recorded more defensive digs than the Bears. ULV had 51 while Washington had only 37.

Smith took credit for 12 of those digs, freshman Lauren Friestad had 11 and junior Jennifer Stout had 10.

Despite the loss, the Leopards were looking forward to their final game in the consolation match.

“It was disappointing, but any loss is going to be, we just have to come out tomorrow and realize our season isn’t over,” Smith said. “We still have a game to take care of.” 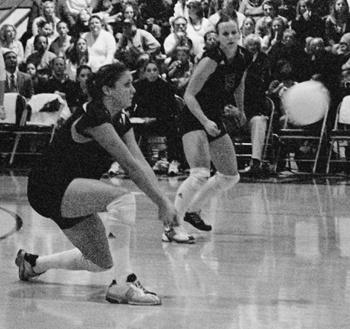 Amy Kratochvil, outside hitter for the University of La Verne, bumped the ball up in a play against Washington University Friday night in the Supertents. / photo by Amy Babin

And with a win in that game, the Leopards retained the No. 3 national ranking they earned during the regular season.

“It’s great going out with a win,” Kratochvil said. “We’re losing key players, but finishing third in the nation is something to start with next season. I’m very proud of the way we played this season.”

The Leopards, who will be returning six of their seven starters for next season, look optimistically to next season.

“This is the most athletic group I’ve ever coached. I’m truly blessed and humbled to be around this program,” Flora said. 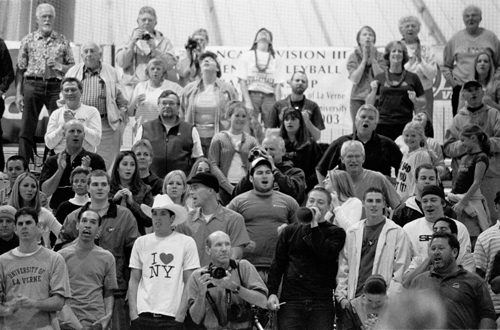 La Verne volleyball fans react to Emory scoring before the Leopards were able to score their match-winning point during the consolation game Saturday night. / photo by Adam Omernik 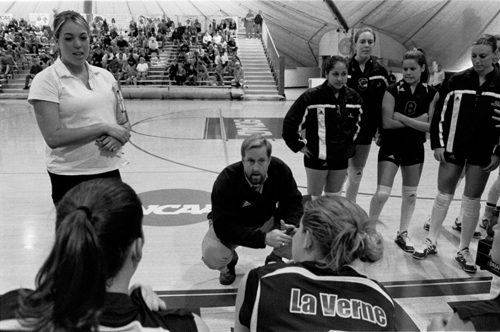 Don Flora advises the University of La Verne women’s volleyball team during a timeout Saturday against Emory University. The team lost the semifinal game to Washington (Mo.) Friday, moving on to play Emory for a third-place finish in the NCAA Championship tournament, coming away victorious, 3-0. / photo by Adam Omernik 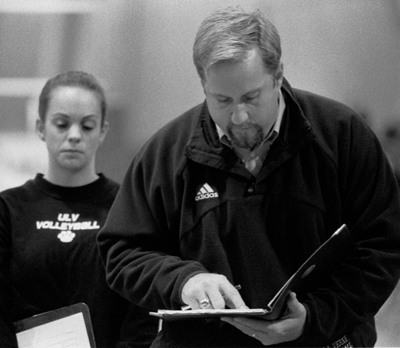 Don Flora, the head coach of the women’s volleyball team, is in his sixth season as coach. Flora has taken the Leopards to the NCAA Championships twice in the last three years. / photo by Adam Omernik 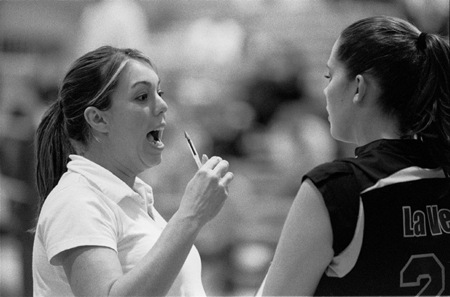 Assistant coach Randi Smart, despite being nine months pregnant, has been on the sidelines with the team throughout its entire NCAA journey. / photo by Adam Omernik

Leopard Scoreboard
Letters to the Editor