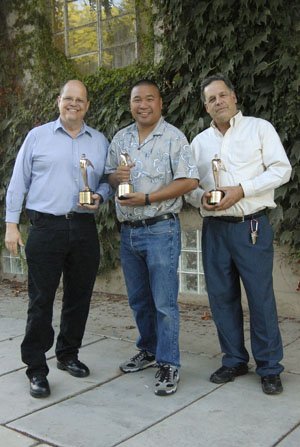 Standing tall and proud with Telly Awards won last year, Mike Laponis, professor of communications; Shane Rodrigues, radio-TV operations manager; and Don Pollock, professor of communications, along with their students, have added to the prestigious television award collection with recent winning entries from W.A.V.E., Pegasus and the Society of Professional Journalists. / photo by Leah Heagy

The Telly Awards, College Broadcasters, Inc. and Broad­cast Education Association are only a handful of the prestigious international and national organizations that have honored the communications department at the University of La Verne.

Tonight, LVTV-3, La Verne Community Television, is up for 10 awards at the Western Access in Video Excellence awards ceremony to be held at the Cable Center in Denver, Colo.

WAVE is part of the non-profit Alliance for Community Media, a national organization dedicated to ensuring the public has access to all electronic media.

The communications department has already won many other awards in video production this year, including a recent award from the prestigious national journalism organization, the Society of Professional Journalists.

SPJ awarded ULV alumnae Chelsea Sherier and Veronica Andrews in the Television Sports Photography category for their work in “Vertical Minds.” The award was presented by SPJ in Atlanta, Ga., in September.

“It feels great that my video is being nationally recognized,” Sherier said.

She currently works as a news photographer and editor for KPTV, Fox 12 in Portland, Ore.

“Vertical Minds” is an inspirational video that examines the physical, physiological and competitive culture of pole vaulting, and the athletes who participate in the sport.

The Pegasus Awards recognized “Vertical Minds” with an Award of Excellence for its 2008 video competition.

The Pegasus Awards is considered one of the gold standards of all video competitions.

Pegasus also gave an Award of Excellence for the “James Swift Profile,” produced by Pollock, Laponis and Rodrigues.

“Being recognized by the Pegasus Awards for the kind of work we do is really a tribute to the program ULV has to offer,” Pollock said.

The “James Swift Profile,” was also a best of show finalist. The piece was shown in February at the President’s Dinner Gala.

The video honored ULV alumnus Dr. James Swift and documented his experience and growth as a pediatrician.

Manrique graduated from ULV in 2006 with a degree in broadcasting and now serves as program director for LVTV-3.

“It was a project that I worked on back in April,” Manrique said. “It’s cool to be reminded of it by winning a Pegasus Award.”

This is the second year La Verne has participated in the competition, bringing the grand total of Pegasus Awards won to eight.

“It is a big deal when our students compete against other professional producers and win,” Pollock said.

Production companies, businesses, educational institutions and organizations from throughout the United States have been honored by the Pegasus Awards.