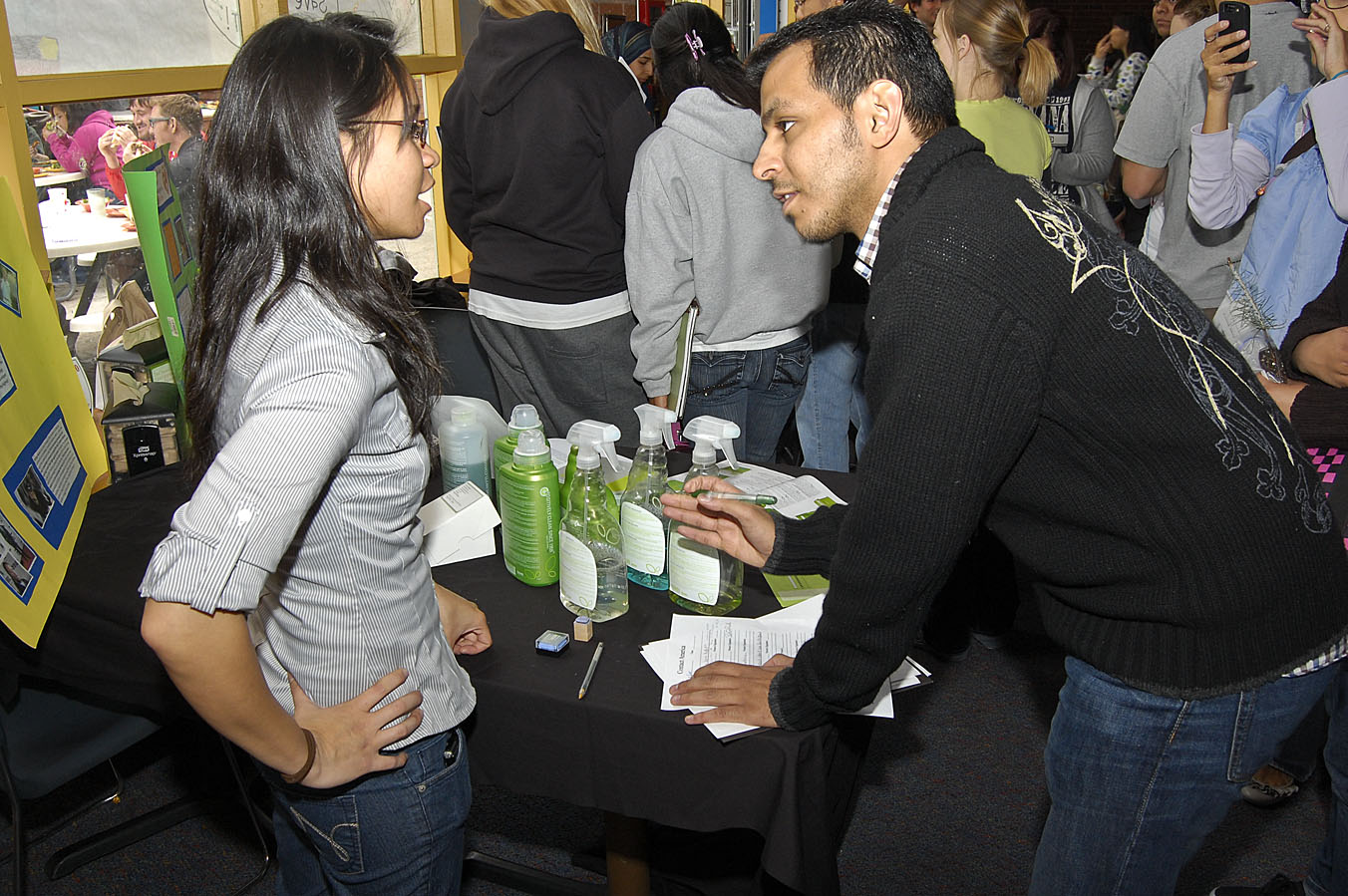 Stephanie White, a junior athletic training major, introduces Muhammad Alsulayman to Legacy of Clean, a line of environmentally sensitive cleaning products by Amway Global. Students piled into Davenport Dining Hall on April 22 for Commuter Day and Earth Day, an event to inform students of ways to help the environment. An array of booths provided tips and lessons on going green./ photo by Christopher Guzman

Campus Activities Board, Green Institute for Village Empowerment and the Society of Physical Life Science Scholars hosted a Commuter and Earth Day event in the Davenport Dining Hall and Sneaky Park last Thursday.

The eclectic day included club booths, free giveaways, LeoFM and a celebration of the earth.

Booths included presentations and information on everything from reusable shopping bags, Wild Earth Spa, Locks of Love and organic food.

Iota Delta, in honor of Earth Day and to help celebrate Greek Week, did a booth where participants could make and take home their own potted plants.

“Iota Delta, as a sorority tries to be as green as possible. We cut down on paper by making sure to post everything online, and just do as much as we can as an organization to help make a difference for the planet,” said Brandy Diep, a liberal studies major and secretary of Iota Delta.

Another group on campus, the Global Medical Brigade, had a booth where students could make friendship bracelets with the idea that you could make one for yourself, and another that would go to a child in Honduras.

“I believe this event is very important because it helps bring awareness about Earth Day to the student body population, as well as educating people on aspects of sustainability, opening people’s eyes to what we can do for earth and giving people an idea of the different clubs on campus and what we do as well,” said Allison Marsh, a biology major and club president of the Global Medical Brigade.

Aside from the booths, there were also games set up in Sneaky Park for students to partake in. Alpha Omicron Phi hosted a life size Scrabble game called Riddle Me This.

“An event like this is great because it unites Greeks, students and faculty,” said Monique Muno, liberal studies major and member of AOII.

“This Earth day event, being in conjunction with Greek Week gives us a reason to all get together. It’s a fun event that is scholastic and diverse with games such as Scrabble and relay races that have a balance of strategy and sportsmanship,” she said.

The event was a great success in getting the world out on different areas of sustainability as well as providing an enjoyable environment and event for students to check out.

Students and faculty alike were able to come listen to the music of Leo FM, learn about different fraternities and sororities on campus, partake in giveaways and games and become more educated on sustainable practices for the earth all over their lunch break.

“It’s great to be a member of a campus that puts on events such as this one because it brings everyone together for a very important cause for this world and it helps support a campus community that is an example of environmental and social responsibility,” said Debbie Deacy, director of purchasing.