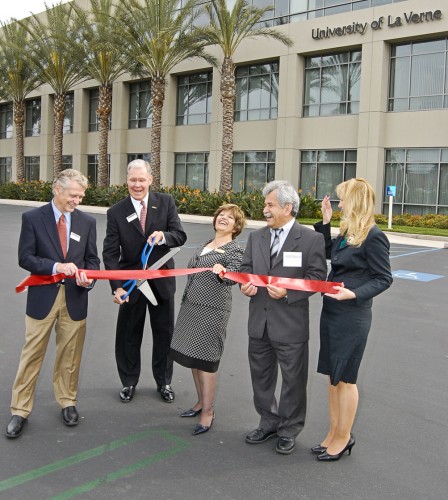 There was a lot to smile about as members of the University of La Verne administration celebrated the grand opening of the new Orange County Regional Campus in Irvine. Provost Greg Dewey, President Steve Morgan, Vice President of Enrollment Homa Shabahang, Professor of Information Technology Mehdi Beheshtian and La Verne City Councilwoman Robin Carder kicked off ceremonies for the opening of the new campus. The Orange County Regional Campus features degrees in business administration, organizational management and public administration. / photo by Christopher Guzman

The University of La Verne commemorated the grand opening of the Irvine location of its Orange County Regional Campus last Friday with a ribbon cutting ceremony and an open house.

“The event was a mixture of a ribbon-cutting ceremony, plaque presentation and mixer,” Alison Rodriguez-Balles, associate director of admissions at the Orange County Campus said.

Students at the Irvine campus can earn bachelor’s degrees in a variety of different majors as well as some master’s degrees.

Placement of a University of La Verne campus in Irvine was well-needed according to faculty members serving at the Orange County campus.

The University of La Verne now has 7 regional campuses offering degree programs for adults around the Southern California area.

“This area has a lot of people interested in earning degrees and this is a location that many people will be drawn to due to the large amount of companies and corporations in the city,” said Judie Simonson, administrative assistant at the Orange County campus.

Homa Shabahang, vice president of enrollment management and professor of economics and master of ceremonies for the event agreed.

“We have had a campus in Orange County in the city of Garden Grove for many years. We believe that Irvine, which is a hub of business and corporate activity in Orange County, is a better location,” Shabahang said.

She said that many students were commuting from Garden Grove to Irvine, so locating the campus in Irvine is more convenient for the student body and corporate partners.

“Plus this new campus is beautiful, modern, and very well equipped,” Shabahang said.

“It will serve the faculty and students much better,” Shabahang added.

Softball snags one from the Athenas
Sagehens outslug Leopards, 14-10