By Pui Lok Choi, Stephanie Arellanes on March 5, 2010 in News 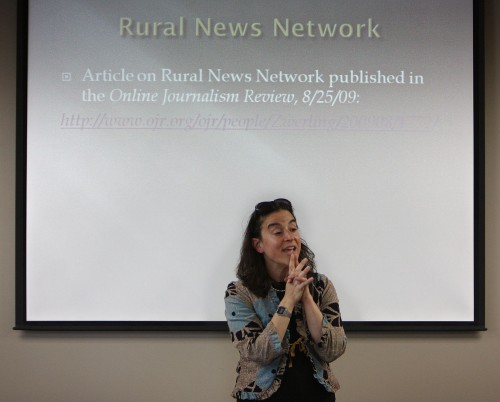 As part of the faculty lecture series, Elizabeth Zwerling, associate professor of journalism, gave a talk titled “Rural News Network: Web Technology Meets Citizen Journalism to Restore a Sense of Community in Rural Montana Towns,” Monday in the President’s Dining Room. Her article on the same topic was published in the Online Journalism Review in August 2009. / photo by Stephanie Arellanes

More than 25 people attended the talk, sponsored by the Faculty Research Committee and the La Verne Academy.

Throughout the lecture Zwerling stressed the importance of local news and small-town news outlets.

She indicated that their approach, relying on a partnership between professional journalists and citizen journalists is being followed more and more by major Web-based news outlets.

“I’m always on the hunt for a good story – and for a better understanding of the transformation currently underway in journalism,” Zwerling said. “The Rural News Network (research) was an opportunity to learn and I got to tell a good story about people.”

For her research, she traveled to Montana, specifically to a town called Dutton, population 375. She planned her trip around the town’s biggest event of the year, Dutton Fun Day, attended by roughly 700.

The town, in the economically depressed Montana plains, lost its newspaper in 2003.

Through the help of the Rural News Network, a project at the University of Montana, journalism students led by Courtney Lowery, editor of NewWest.net and adjunct professor of journalism, Dutton was able to establish a local news Web site.

The RNN online is filling the void created of by loss of local newspapers, Zwerling said.

We hear much about the demise of major metropolitan newspapers,  Zwerling said. But in the 1990s and 2000s many small towns also lost their newspapers.

“Small communities also lose when their sole source of local news is taken from them,” she said.

The Dutton Country Courier online was launched in 2007.

That year, the RNR class also launched Crownews.net, a community news site in Crow Agency, an Indian reservation in southern Montana, which never had its own local newspaper.

For the project students taught residents of both towns Web technology and how to be citizen journalists.

Zwerling said that while the democratic Web has created ethical problems for professional journalists and journalism organizations, it has also opened doors for citizen journalists and community news sites.

“I believe RNN and citizen journalists will be a part of a new trend” said Bill Cook, professor of English who attended the Monday event.

The constant change of journalism can open more doors for students and allow for news to be reached by people lacking a strong true local newspaper.

“Being a journalism student, it’s very important for me to know what is going on with the advancement of journalism,” Carly Hill, sophomore journalism major, said.

Pui Lok Choi can be reached at pui.choi@laverne.edu.