By Candice Salazar, Christina Collins Burton on April 8, 2011 in News 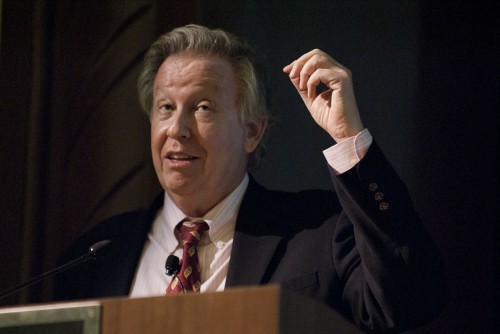 Mark Pinksy, author of “The Gospel According to The Simpsons” and “The Gospel According to Disney,” spoke about his recent book in Morgan Auditorium on March 31. Pinsky has written several books on faith and entertainment. Pinsky is also a contributor to several periodicals, including as USA Today, the New York Times and Christianity Today. / photo by Candice Salazar

The Wonderful World of Disney was picked apart on Thursday by author Mark Pinsky, who spoke in Morgan Auditorium as part of the star-studded dedication week.

Pinsky, author of such titles as, “The Gospel According to the Simpsons” and “A Jew Among the Evangelicals,” spoke on how Walt Disney hid religious symbols and ideas in his films and how, as the company changed hands, those messages became more visible.

“I never really thought about the subtext in Disney and the religion that isn’t really in it,” said Randy Miller, adjunct professor of journalism. “It is a lot of food for thought.”

Pinsky was selected to speak by Jonathan Reed, dean of College of Arts and Sciences, because of the fact President Steve Morgan has a love of Disney. Pinsky also had a long career as a religion journalist.

“Pinsky would be someone that Steve would want to listen to talk about Disney,” Reed said.

Pinsky opened the talk by sharing with the audience his inspiration for his books that picked apart the “gospel” of some popular pop culture.

Disneyland’s popularity has made it a shrine that American families feel compelled to visit as a rite of passage, Pinsky said.

Pinsky’s presentation included a slideshow to accompany his words.

Each slide had between one and three brightly colored pictures showing some of the Disney classics that many Americans have grown to adore.

One of the biggest surprises Pinsky brought to the crowd’s attention was the Main Street of Disneyland.

Even though Disney was the master of being vague, there is no church on Main Street.

“As many times as I have been there, I had never realized there is no church on Main Street. Even though a lot of towns at that time had churches,” President Morgan said.

Instead of taking a religious point-of-view in all of his films, Disney changed images of prayer to wishing upon a star and miracles into magic, Pinsky said.

“In North Africa, China, India and Europe they didn’t share Judeo-Christian values. By choosing Magic, he was able to draw in children from around the world,” Pinsky said.

The morals and beliefs that are inherent through Disney’s films are imprinted on youth without the mention of a god or a specific religion, he said.

“Disney is advertised as the happiest place on earth, not the holiest,” Pinsky said.

As Pinsky closed his speech, he opened the floor to questions from the audience about Disney or any of his works up to that point.

Many of the questions were geared toward his book “The Gospel According to the Simp­sons,” asking how shows like The Simpsons have given values to the current generations.

“The Simpsons go to church and their portrayal of faith mimics Americans precisely,” Pinsky said.

“The Simpsons exhibit family values, get into trouble and have problems, yet they get out of everything by supporting one another.”

After the question and answer session had come to a close, Pinsky presented a copy of “The Gospel According to Disney” to the Morgans, because Steve Morgan is an avid Disney fan.

Pinsky then presented a copy of “A Jew Among the Evangelicals” to President-Select Devorah Lieberman’s husband, Roger Auerbach.

Pinsky left the audience in awe as he finished his speech and walked off the stage.

Many audience members walked out of the auditorium mentally reassessing the popular icons that had a lot of influence on their daily lives, without them even realizing it was happening.

“I thought he had an interesting take on Walt Disney, I never looked at Disney that way, from a religious aspect,” Morgan said.