By Hunter Cole, Sarah Veissalov on October 19, 2012 in Soccer, Sports 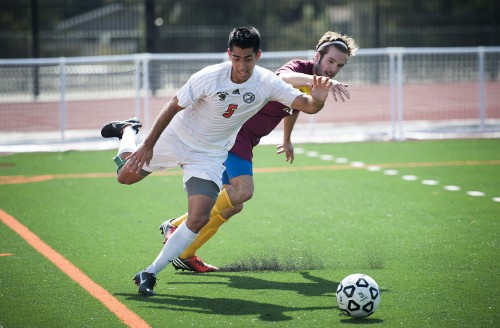 The men’s soccer team tied with the Claremont-Mudd-Scripps Stags, 1-1, after both teams failed to score a goal in the two overtime periods Saturday morning at Ortmayer Stadium.

The tie left the team frustrated after a setback in the 89th minute.

“We did really well,” junior captain and center back Andrew Geenen said. “We matched their intensity.”

The game opened with a slow start, with both teams defenses stopping one another.

Cheering arose when senior forward Luis Chavez was on the run to make a goal, but his attempt failed after the ball passed the wrong side of the post.

The first half of the game ended with a scoreless tie.

The intensity began to rise when the second half began with each team fighting to score a winning goal.

Both teams began to play aggressively bringing a more competitive vibe hoping this would lead them to scoring a goal.

With just 15 minutes in of the second half, sophomore midfielder Boye Christiansen scored a goal for La Verne by crossing the ball from the right having it bounce off a CMS defender and hit the top corner of the net and scored the first goal of the match.

CMS knew they had to pick up themselves and try and push for a goal before time ran out.

The clock was winding down and within the last minute of the final half, CMS used a mishap from La Verne to their advantage to make a goal for their team bringing them to a 1-1 tie.

“One minute away the ball bounced away and went through two people’s way,” Geenen said. “It was unfortunate.”

“The energy was there, passes were off, but overall we did well,” junior forward Fernando Almejo said. “The last minute just fell apart.”

The Leopards and the Stags felt the pressure during the two overtimes, but both teams were unsuccessful in making a goal to break the tie.

The disappointment could be seen in head coach Crescencio Gonzalez’s face after the game ended.

“We don’t play to tie or lose,” Gonzalez said. “They played hard and gave everything and that was the result they got.”

Gonzalez said the team’s combination of skills has improved and the team understands each other’s habits.

“It takes a while for a team to come together,” Gonzalez said.

Almejo did not feel he would have done anything different during this game. He said the luck just was not there.

“The pressure and high intensity matched the other team,” Almejo said.

“Defensively we did well, but we could have shot quicker,” Geenen said. “We deserved to win, shouldn’t have been a loss.”

Gonzalez said the team has been following an inspirational quote for these last games and will continue in the future.

“Believe that you can and you will,” Gonzalez said.

The Leopards also lost to Chapman, 2-0, Wednesday, leaving the team with a record of 5-7-1 in the Southern California Intercollegiate Athletic Conference and 7-8-2 overall.

La Verne will visit Redlands for their next game at 1 p.m. Saturday.