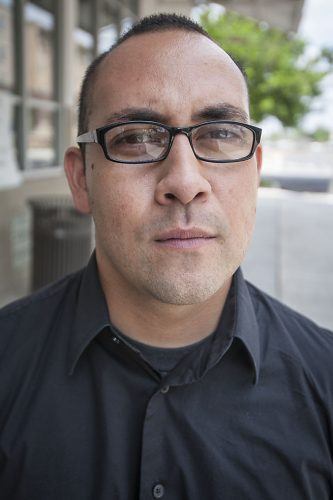 Brian Velez, who graduated from the University of La Verne in 2013 with a degree in communications-public affairs, died Sept. 27 at age 33 due to an undiagnosed illness.

Mr. Velez was on the Campus Times staff for three semesters, including serving as LV Life editor.

A celebration of his life was held Oct. 4, at Funeraria del Angel in West Covina.

His sister, Diane Velez, had requested that people not share condolences but instead name songs that could be played in remembrance of her brother at the service, and tell stories about their times with Mr. Velez.

Campus Times faculty adviser Elizabeth Zwerling went to the memorial service. She said that an overflow of people called for extra seats beyond the pews, and many friends and family stepped to the open mic to memorialize Velez at the service.

“Each story showed what a kind, connected, caring and honest person he was,” said Zwerling, professor of journalism.

“I realized that everyone felt like Brian was their special friend.”

She added that the stories and open casket made the Mr. Velez’s death real.

“I was stunned (about his death) because he had been in here just a few weeks ago,” Zwerling said.

“I was thinking while people spoke, ‘I gotta get together with him and ask him about some of this stuff.’”

Zwerling said that Mr. Velez had frequently visited the Campus Times newsroom after he graduated to catch up and bring pizza for the staff, simultaneously doing PR work by making sure the Times was covering pertinent issues in the San Gabriel Valley.

Alumna and former Campus Times Editor in Chief Mariela Patron, who earned her degree in journalism in 2015, said that her relationship with Mr. Velez grew after she realized they were from Baldwin Park and both attended Baldwin Park High School, although 10 years apart.

“He inspired me to reach out to my old teachers and use my journalism skills to give back to my high school,” Patron said.

“He had the right words when you needed them the most.”

Patron added that Mr. Velez would frequently update her on what was going on in Baldwin Park after she moved away.

Mr. Velez was community outreach coordinator for BikeSGV, an advocacy organization that promotes and creates safer streets in San Gabriel Valley cities, such as El Monte and Velez’ hometown of Baldwin Park.

“He loved the community and it’s sad because Baldwin Park needs more people like him,” Patron said.

“I hope he inspired people to give back to the communities who need people to care about them.”

Alumnus and former Campus Times Editor in Chief Christian Orozco, who earned his degree in journalism in 2013, said that he and Mr. Velez bonded over their love of hip-hop.

He would always make mixed CDs to give Orozco and his other friends.

Although Mr. Velez was more into mainstream and Orozco considers himself holding hip-hop to a higher standard, Mr. Velez would show him the value in popular music.

In a Campus Times editorial board meeting, Mr. Velez’ proposed an editorial about misogyny in many popular hip-hop songs. While it didn’t end up as an editorial, Mr. Velez supported Orozco in writing a column on the topic instead.

“He asked me to write it although it was his idea,” Orozco said. “He could always remove himself from the situation. I admired that.”

Orozco said that Mr. Velez would just throw his ideas out there and always had confidence in them.

Orozco added that he took that from him and applies it to his own experience as a journalist.

“When he was given the opportunity to elaborate he was always on point,” said Orozco, who currently works for the Los Angeles Time.

“He would be annoyed, but he’d turn it into something funny,” Ramos said.

She added that people would look at him funny because of his off-beat jokes, but always ended up laughing.

“I don’t think anyone ever saw him angry. It turns your mood around when people have that energy.”

Ramos said she still feels like he is always here because his presence was always apparent, but never thought she would see a day without his random tweets, texts and calls.

“That was my friend,” Ramos said. “I never knew another Brian.”

The Velez family has created a scholarship fund for other young leaders like Velez to achieve their goals.

“Creative, connected and gutsy should be the scholarship criteria,” Zwerling said.

How to get health care
Mariachi serenade Scripps