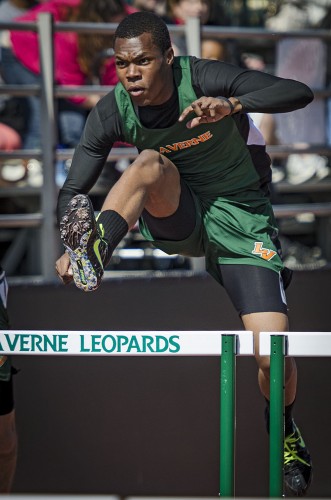 Junior James Francis races to win his heat of the 110-meter hurdles during the La Verne Invitational meet Saturday at Ortmayer Stadium. Francis finished second with a time of 16.31. / photo by Zachary Horton

La Verne’s track and field team raced to victory on Saturday, placing first in 17 events at the first invitational hosted by the Leopards.

The women were dominant in all areas as they placed first in 13 out of 17 events.

Akauola believes a large part of her success is due to her new throwing coach.

“I’m confident.” Akauola said, “This win makes me prepared for next week going into SCIAC Conference.”

Other first place winners in field events included sophomore Christiana Coughlin, who threw 117-10 in javelin, and junior Katie Yeager who tied with sophomore Taylor Bernhard for first place in the pole vault, clearing 10-8.

“I really surprised myself.” Moreno said, “Having my teammates out here encouraging me and supporting me along the way definitely helped.”

The men’s team won four events out of the 17.

All-American Chancise Watkins won the 200-meter race with a time of 21.78, while Jacob Lopez placed first in the 100 hurdles.

Lopez also placed first in triple jump with a winning leap of 43-5.

Brock Booth, a sophomore at La Verne, took first in javelin after throwing 165-4.

La Verne’s men had solid efforts all around with second place finishes in the 4×100 relay, and the discus, with senior Ryan Gann throwing 137-11. Sophomore Bryan Hayes also placed second in the 3000, clocking in at 8:58.

Junior transfer student James Francis placed second in the men’s 110-meter hurdle, and third in men’s high jump with a 6-2.

The La Verne Invitational was a great way to prepare for the start of SCIAC conference, according to head coach Pat Widolff.

The Invitational hosted on the new Ortmayer stadium gave many of the La Verne competitors more confidence.

“We plan on working harder and practicing harder in every practice.” Widolff said, “We want the kids to get more engaged.”

La Verne will start SCIAC conference next weekend as they prepare to face Pomona-Pitzer, Occidental, Chapman, and Whittier.