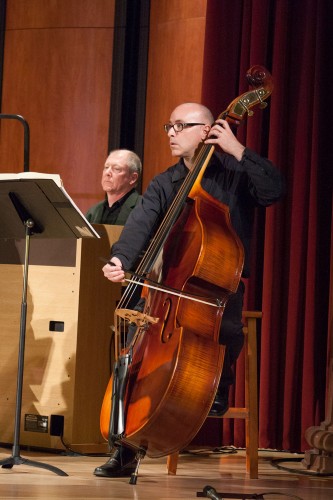 Cellist Rick Mooney accompanies the La Verne Chamber Singers in a concert in Morgan Auditorium that was a culmination of choral music that professor of music Kathy Lamkin taught in her classes during her 34 years at the University of La Verne. / photo by Bailey Maguire

Kathy Lamkin, professor of music, was honored for her 34 years of service at the University of La Verne in a choral concert May 17 in Morgan Auditorium.

The ULV Chamber Singers and an orchestra, under the guidance of conductor and Instructor of Music Carol Stephenson, performed pieces from the many periods and styles of choral music that Lamkin has taught about in her classes throughout the years.

“She was truly the heart of life for the students,” said Emmanuel Lagumbay, ULV alumnus and former student of Lamkin. “You heard centuries of music, timeless music, that she was the one to share with us through her classes.”

Stephenson, who planned and directed the concert, described it as a “live experience of a quick history review,” in homage to the music history classes Lamkin taught at the University.

The very first piece, a Medieval English rota “Sumer is icumen in” from the 13th century, came directly from one of the textbooks Lamkin used in one of her classes.

The rota, which was performed acappella by the Chamber Singers, is the oldest known six-part composition that celebrates the coming of summer.

The concert transitioned into the 17th century with “Music, Spread Thy Voice Around” from George Frideric Handel’s oratorio “Solomon.” The piece featured senior music major Vicky Campos as a soloist.

The orchestra joined the Chamber Singers for a performance that featured a trio of Hallelujahs, which are similar in text, but varied in compositional styles.

“Kathy’s primary focus as a musicologist was on the music of (Franz Joseph) Haydn,” Stephenson said. “So we couldn’t do a concert without a Haydn piece.”

Haydn’s “Missa brevis St. Joannis de Deo,” also known as the “Small Organ Mass,” is the music of the Ordinary, or order, of the Roman Catholic Mass.

Junior music major Sarah Alonzo was the soprano soloist for the movement “Benedictus” in the Missa brevis.

One of the other specific pieces performed that Lamkin mentioned was “Choose Something Like a Star” from the song set “Frostiana” by composer Randall Thompson.

“Frostiana” is a series of music written to the poems of Robert Frost. Lamkin’s legacy was also honored by three pieces written by local composers, two of whom were her students.

“Tu Voz” by Shawn Kirchner of the Los Angeles Master Chorale and the composer-in-residence of the La Verne Church of the Brethren takes the words of poet Pablo Neruda.

“The main point is, ‘Music moves me like a sea,’” Eager said. “The lyrics are all about the emotions that music gives us, and it can move us to do such great things.”

The final piece was “The Heart of Life,” written and conducted by Lagumbay.

“One other thing I definitely thought about was, ‘How do I pay tribute to someone who has done 30 plus years of work for a university that I’ve only known for three and a half years?’ he said. “But I was very surprised to see how simple it was, because the first day you’re at Kathy’s class, you can see all the passion. You can see 30 years of passion.”

Lagumbay wrote the piece based on a quote by composer Franz Liszt, “Music is the heart of life. She speaks love. Without it, there is not possible good. With it, all is beautiful.”

“And that is definitely something Dr. Lamkin wanted all of us to know; that music does all these things,” he said.

In a genuine, heartfelt tribute to Kathy, the Chamber Singers sang “Thank you for the songs you’ve shared.”

“Thank you, really, for the songs that you’ve shared for us, for everything that you’ve done,” Lagumbay said. “Because we are the ones that are able to live out through the music that you have showed us, and without it, we would not be here.”

At the end of the concert, Lamkin expressed nothing but gratitude to her students, peers and faculty.

“I want to thank all of you for all that you have done and all that you did in those music history classes,” she said. “I once got an award from Mu Phi Epsilon for having the hardest exam — I felt that was a real compliment. We are here to learn, we are here for education.”