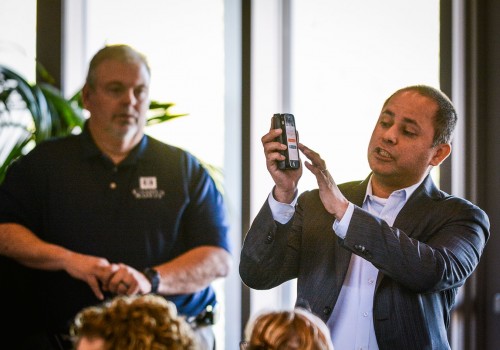 Associate Dean of Students Juan Regalado walks students and faculty members through the process of activating University of La Verne’s emergency notification system, E2Campus, using the LiveSafe mobile app at a community meeting Tuesday. The event scheduled the day after an armed robbery at the Oaks Residence Hall Monday night prompted a campuswide lockdown. Students, resident assistants and faculty asked questions about the incident and learned procedures to follow should it happen again. / photo by Daniel Torres

On Tuesday several University departments including Campus Safety, housing and counseling came together for a meeting in the Campus Center to discuss the incident, address concerns and answer questions.

“This is a time to remind us that we are a community, and that we should be mindful of our safety,” said Loretta Rahmani, dean of student affairs.

Around 11:30 p.m. on Monday near the Oaks Residence Hall, a male suspect held a gun to a female student and demanded she give him her backpack, said interim safety director Jeff Clark. The student complied, dropped her backpack and ran into Oaks.

The University issued a campus-wide lockdown that lasted for more than an hour, until after 1 a.m.
LVPD released a suspect they initially apprehended that night near the railroad tracks along Arrow Highway after determining he was not linked to the robbery.

Campus Safety attempted to keep the campus community notified about the developing incident by sending out text and email alerts through ULV’s emergency notification system. Messages were sent out to 2,200 devices — however, not everyone received them.

“After finding out that not enough people signed up for this system, what we’re going to do better is take a proactive route now ahead of time, so that people are aware and can get notifications,” said Clive Houston-Brown, vice president of facilities and technology.

To receive timely emergency notifications, students and faculty would have to activate E2Campus through MyLaVerne.

E2Campus expires after two years, and Campus Safety plans to do more outreach to the campus community to ensure their accounts are reactivated.

The LiveSafe app is also an option the campus community members could use for an emergency and safety resource on their mobile phones, but students, faculty and staff have to choose to download it.

Campus Safety is also looking at the possibility of adding a video surveillance system, either to all the emergency blue lights or separately, in the next six to eight months.

Houston-Brown said Campus Safety is also planning to roll out a series of training programs to faculty, students and staff that deal with specific emergency situations, such as how to prepare for an active assailant on campus.

“Our student leadership, clubs, athletes and Greeks will go through the training and to help them push out the message to all students,” he said. “Beyond that, we have to push to make sure commuters or anyone who isn’t connected to clubs or things like that at least know what to do.”

Shang said the resident assistants are trained to deal with situations like these, especially if they occur near student housing. 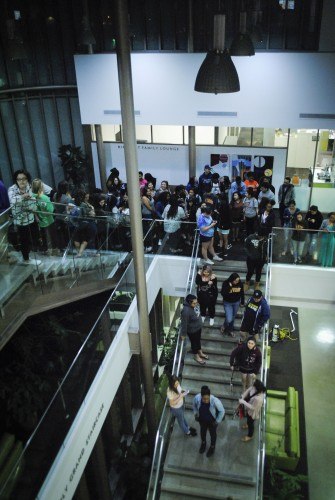 Students who attended Ebony Stewart’s sex education talk Monday in the Campus Center were held inside the building when an armed robber was reported outside. Nearly two hours later, Campus Safety lifted the lockdown. / photo by Nadira Fatah

“All the RAs were participating in making sure their residents were there and stayed there, monitoring the doors, making sure that people weren’t going in or out for their safety,” he said.

All the resident assistants stationed themselves around the doors during the lockdown, Shang said.

“It was really just a lot of training and keeping people in, making sure they’re safe,” he said. “And the residents themselves were really cooperative. That’s the other part. This doesn’t work too without the cooperation of the residents.”

LVPD and Campus Safety has increased patrols in the area, Clark said.

The suspect is still at large. Police are not giving out the description of the suspect because it is too general.

University officials recommend that in the meantime, students should walk in pairs and avoid dimly-lit areas.

“If you see something, say something,” Rahmani said. “Be aware and be alert.”

Emily Lau and Jolene Nacapuy also contributed to this report.