By Karla Rendon, Michelle Zimmerman on March 4, 2016 in News 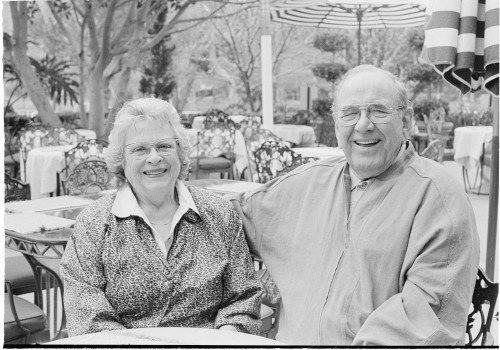 Former University of La Verne Chancellor and Trustee Emeritus Richard Landis died Feb. 14 in his home at the age of 95. Landis and his wife of 72 years, Beth, met as students at ULV and have a long history of support for the University, mainly through the establishment of the Landis Leadership Scholars program. His mark on the University prompted the Landis Academic Center to be named in his honor. He leaves behind his wife, three children, nine grandchildren and 13 great-grandchildren. / file photo by Michelle Zimmerman

Richard Landis, former University chancellor and trustee emeritus, died Feb. 14 in his sleep at the age of 95.

Mr. Landis leaves behind a legacy of philanthropy, selflessness and support for lifelong learning.

Mr. Landis gave magnanimously to the University with the Landis Endowed Scholarship, which offers more than $100,000 in scholarships to students interested in pursing leadership or business careers.

“Dick Landis embodied the values of La Verne, and through his generous scholarship fund, hundreds of students have been able to develop leadership and teamwork skills with an emphasis on ethical reflection,” Provost Jonathan Reed said.

During his longtime experience with the University, Mr. Landis served as chancellor from 1984 to 1985 and a member of the Board of Trustees for 15 years.

“Dick Landis was someone who I thought defined ‘greatest generation,’” former University President Steve Morgan said. “He fought in World War II, started in the field picking fruit for Del Monte and retired as Chairman and Chief Executive Officer of the company. He gave a lot to his community, and he was on the Board of Trustees as well as served as Chancellor. He came from very modest beginnings and has accomplished a lot in his lifetime.”

Mr. Landis left such a significant mark on the University that the Landis Academic Center was named and built in his and Beth’s honor.

“Chancellor Dick Landis was a generous man with his time and his money,” said Al Clark, professor of humanities. “He not only helped La Verne build the Landis Academic Center, but he provided critical leadership during a difficult presidential transition that ultimately led to the selection of Stephen Morgan as president of the University.”

He is survived by his wife of 72 years, Beth Landis, and sons Gary Perrin Landis and Dennis Michael Landis, and daughter Kay Landis Dillon, as well as his nine grandchildren and 13 great-grandchildren.

A memorial service will be held in Mr. Landis’ honor at 5 p.m. Saturday at Peace Lutheran Church. In lieu of flowers, his family is requesting donations to Hospice of Foothills.

Electronic privacy is vital
Powell speaks out on racism, sexism