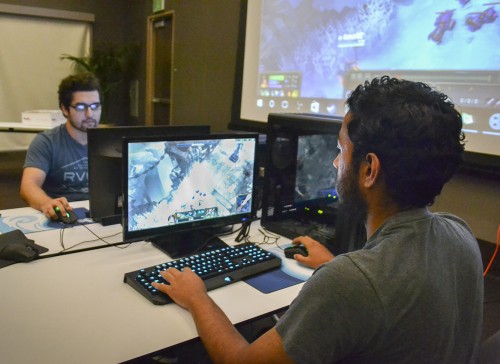 Battling each other in an intense game of League of Legends, junior biology major Edward Espinoza and sophomore mathematics major Henry Perez showcase their gamer skills at the ULV Gamers Guild League of Legends Tournament on Oct. 15. Held at Campus Center Ballroom B, members were invited to compete to become tournament champion. League of Legends is a multiplayer fantasy computer game where players compete in battlefields to destroy the opposing team’s base, known as a nexus. / photo by Karla Rendon

In a game based on strategy and reaction time, competitive gamers were tested at the League of Legends tournament hosted by the Gamers Guild in the Campus Center Oct. 15 and 16. Gamers Guild is a club that promotes gaming on campus.

With help from the Texas e-Sports Association (TeSPA), a collegiate program run by Blizzard, which makes World of Warcraft, Gamers Guild runs competitive tournaments on a regular basis.

League of Legends is a role-playing and real-time strategy game.

“That’s our mode for most of our support and funding around here,” said sophomore history major and Gamers Guild president Jack Bowman.

The tournament started with 10 competitors, but only freshman international business major Jeffrey Chun walked away with a pair of gaming glasses from Gunner Optics, which sponsored the event.

Chun, who has played League of Legends for the past five years, used strategy and skill to win the two-day tournament.

“It makes the game a lot more fun by playing with someone you know,” Chun said.

The runner-up of the tournament, freshman business administration major Wei Ping Gong, considered what went wrong in the final match.

“I used flash twice and it ended badly,” Gong said.

Bowman hopes this is just the beginning of many tournaments to come due to the popularity of games.

Along with Super Smash Brothers Melee and Hearthstone, League of Legends is one of the most popular games on campus, according to Bowman.

“Those are the big three that we notice that have the most traction on campus,” Bowman said.

Bowman compared e-sports to any other competitive sport in the country.

“When people get into a competitive situation like this, it’s kind of the same thing,” Bowman said. “They realize, ‘This is something that I’m good at, that I can do and that I can potentially make money off of and do for a living.’”

Bowman started the Gamers Guild last semester with a few friends who were not satisfied with just playing games in their dorms.

They wanted to make sure every one on campus had a place to compete.

“We realized that we didn’t have a gaming presence as a community on campus,” Bowman said. “There was nothing.”

Before Gamers Guild, the only organizations on campus that had gaming tournaments were fraternities, but they were not consistent.

Gamers Guild will not only continue competing, but wants make a difference in the community through gaming.

Gamers Guild will host a 24-hour live stream of non-competitive gaming Nov. 6, but gamers will still have a chance to play anything from party games to role playing games.

The money raised will go to Extra Life, a charity that donates money to the Children’s Miracle Network Hospital through live-stream gaming.

Bowman also said they plan to do another tournament where gamers play Super Smash Brothers Melee later in the semester.