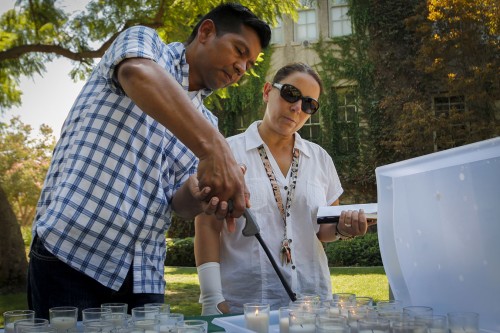 Jose Perez-Gonzalez, professor of modern languages, and Gloria Montebruno Saller, professor of modern languages, make a silent prayer as they light a white candle in honor of the victims of 9/11 at the remembrance event Sept. 11 at the rock. Those who attended were given the option to light a second candle for any personal reasons. After the first candle, Saller lit another, which she said made her emotional as she was reminded of being away from her home in Italy. / photo by Emily Lau

Approximately 30 people gathered at noon Sept. 11 around the rock, to honor the anniversary of 9/11 for the Office of Religious and Spiritual Life and the Veteran Student Success’ September 11 Remembrance.

University Chaplain Zandra Wagoner welcomed guests by pointing direction to the Rock, which was painted by the ULV Veterans Club in commemoration of 9/11.

The ULV Veterans Club painted the Rock on one side reading 9/11 with the 11 as the Twin Towers.

On the other side of the rock, they painted the American flag and its right side with a survivor tree to represent the resilience, survival and rebirth, as well as a white ribbon to represent the ongoing violence in the world.

“Because this event has been impactful to the world and has had a lot of effects, I hope that this moment is a reminder to create these visions of peace and to figure out ways to build towards that,” Wagoner said.

Wagoner invited three volunteers to speak about their personal experience with 9/11.

“I want to recognize that there are a variety of meanings attached to this day so we may have different perspectives, different ways of reflecting this day,” Wagoner said. “One of the blessings of being here at this University is that all of those perspectives and experiences are something we value.”

Junior biology major Oscar Mauricio was 11 years old when 9/11 occurred and cites it as the reason he joined the military.

“Although I didn’t know anybody who was a victim of this day or any of the families, it’s that invisible connection that I felt between another American that suffered because of what happened on September 11,” Mauricio said.

After the volunteers’ speeches, Wagoner invited guests to refer to a reading of remembrance given at the beginning of the event.

A moment of silence was then given to honor the victims followed by three prayers of peace, including a Christian, Muslim and Jewish prayer.

The event ended with the lighting of white candles in remembrance of 2,977 people who died on 9/11.

“What really got me was the three prayers,” said professor of modern languages Jose Perez-Gonzalez. “It connected everyone together regardless of faith.”

“I approached her and she said she’d be happy to co-host the event,” Towles said.

“They (ULV Veterans Club) have our club meetings Thursday nights and that happened to be the night of the 10th so they decided to do a short business meeting and spent the rest of the meeting painting the rock.”

Towles hoped the event would inspire the audience to continue to strive for peace.

“Maybe if we take a portion at a time and work away at it, we can achieve peace.”