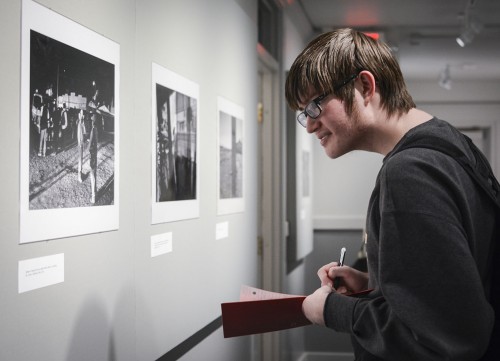 His exhibit, “The Driest Seasons: California’s Dust Bowl,” is featured in the Carlson Gallery and focuses on central south-California’s response to the ongoing drought. Photographs of migrant workers, nearly-empty eateries and children playing in the blistering sun give guests a glimpse into how devastating the drought has really been.

His photographs of the drought were featured in the Los Angeles Times, and were received with empathy from readers.

“We didn’t want to tell the environmental story or the political story because other reporters were already doing that,” Robinson Chávez said. “What we really wanted to do was show the people who were directly affected in the California Central Valley.”

Robinson Chavez’s intention was to show viewers the human aspect behind the drought who have been experiencing the worst of the drought.

“At the time we were reporting this, people in Los Angeles and Southern California in general were just using water as they always had for ridiculous use and were wasting it,” Robinson Chavez said. “We wanted to show that people were being really hard-hit by this and that people were completely without water. What would it be like if Los Angeles were in that situation? That was the inspiration behind it–to show people the direct result of the drought on human life.”

His series struck readers with compassion as $18,000 were donated to a man featured in his photographs who was $8,000 in debt, and raised $20,000 for another family, Robinson Chávez said.

“The best thing you can hope for is that you affect the readership in some way,” Robinson Chávez said. “As these stories started to run, many of the characters that we were viewing with severe hardships, the viewers really came through for them. Readers really came out. They read these stories and helped, and that’s what we were most proud of.”

“I think what this series does that’s really important is that it adds a human dimension,” Millare said. “I think one of the things the exhibit does is shows the drought impacts an industry of people. So you see the faces of this industry that people are referring to. There are families whose day-to-day life have been impacted.”

Freshman sociology major Jazmine Marquez found the visuals of the drought to be devastating.

“I know we’re in a drought, but seeing photos of how terrible some areas are is eye-opening,” Marquez said.

Marquez was surprised to find similarities between Robinson Chávez’s series in India and images shown in the movie “Slumdog Millionaire.” “In most movies you figure they alter the truth or some of the images. So to see (India) being an area of poverty but also a source of revenue was quite interesting.”

Professor of Photography Gary Colby asked Robinson Chávez how he addressed the criticism that photojournalists receive about exploitation.

“The Driest Seasons: California’s Dustbowl” will run through March 24 in the Carlson Gallery. 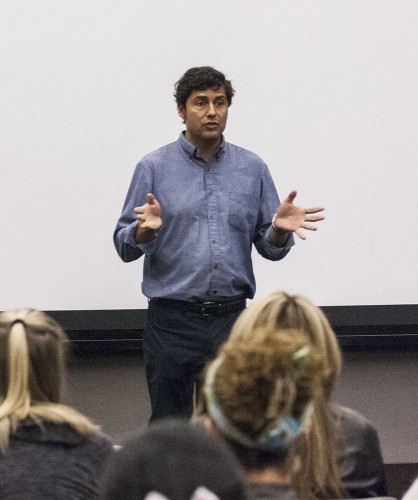 Los Angeles Times photographer Michael Robinson Chávez discusses his photographic essay “The Driest Seasons: California’s Dust Bowl” to a packed room of students Feb. 18 in the Campus Center Ballroom. The pictures were produced in 2014 and 2015 for an extended series that was published in the Times. Robinson Chávez spoke about the social consequences of the drought in the San Joaquin Valley and answered questions about his photographic experiences. / photo by Terrence Lewis