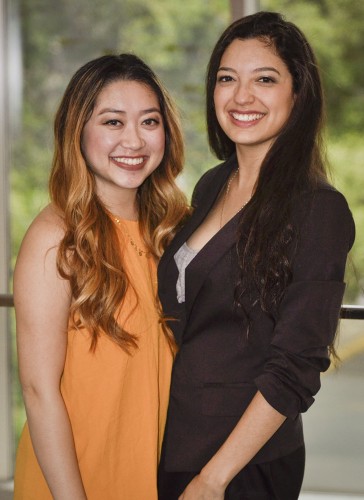 Junior kinesiology major Alaia Azarcon and Junior business administration major Alexis Coria are the recently elected executive Vice President and President of the Associated Students of the University of La Verne for the 2016-2017 school year. One of their ideas is to produce a free app for students to provide daily alerts for both residents and commuters to be involved in events on campus. / photo by Meghan Attaway

With bright ideas such as an app that will announce on-campus events and higher transparency of what ASULV is doing, newly elected Associated Students of La Verne President Alexis Coria, junior business administration major, and Vice President Alaia Azarcon, junior kinesiology major, aim to strengthen the University’s mission statement on community and diversity.

“When I was a sophomore the past year, I was more out of my room and able to notice how “clique-y” everything was,” Coria said.

“When you’re actually working internally with the Univer­sity, you see a lot more,” she said.

Currently in the process of picking their executive board, Coria and Azarcon have already discussed new ideas they will implement as president and vice president, as well as goals and budgeting for their term.

“All the action stuff really happens during the summer,” Coria said. “We also want to include our senate in it because we don’t want there to be a dictatorship. We preach inclusivity and we want to start that with our senate as well.

The duo plans on further discussing the possibility of the app coming to life during their summer meeting. The point of the app is to stimulate student life as well as inform students of activities happening on campus.

“It’s not a for sure thing, it’s something we want to do,” Coria said. “It’s an idea we would like to bring to the table as maybe having a mobile Toilet Paper where students can have a sea of monthly events on their phone and get alerts not just for events, but games as well to support our student athletes.”

With diversity being the center of their campaign, the biggest challenge Azarcon and Coria expect to face is student participation.

“Everyone is quick to say ‘We don’t have it,’ but not everyone is as quick to participate or make a change or move forward to achieve our goal,” Coria said. “So, we really ask that it’s upon the students as well.”

“In ASULV the vice president has to deal with internal problems and I’ve seen (Azarcon) deal with things very professionally,” she said.

Aside from tackling diversity, the newly-elected president and vice president hope to maintain relationships with administration.

“Again, we just want to bring back one of the values that we have of communication and connection,” Azarcon said. “We want to make sure that there is that transparency where we’re aware of what (administration) want and vice versa.”

“We are just trying to include everybody, and making sure that everyone feels a part of the La Verne community is really what we want to try to bring back,” Azarcon said.

Commentary: Cinco de Mayo is not your excuse to drink
College of Law ABA accreditation celebrated