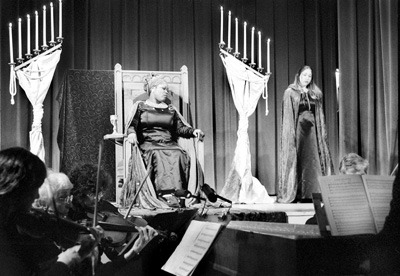 “Dido and Aeneas,” an opera by Henry Purcell, was presented by the Department of Music on Tuesday, May 2, in Founders Auditorium. Natalie Ganther, a senior music major, played Dido, queen of Carthage. Ganther is part of the ULV choir and an instrumentalist, playing the piano, guitar and violin. / photo by Vicky Martinez

by Christian A. Lopez
Staff Writer

Seats in Founders Auditorium filled quickly on Wednesday, May 2, as people flocked to see the University of La Verne’s chamber singers perform “Dido and Aeneas,” an opera by Henry Purcell.

Purcell, known as one of England’s greatest composers, wrote the musical in 1689 for a fashionable girl’s school in London and it has been recognized as one of England’s oldest and most notable operas. It was adapted from part of the Aeneid by Virgil, but differentiates in that witches are incorporated into the opera.

The story opened up with its main character Dido, Queen of Carthage, sitting in her palace. Played by senior Natalie Ganther, Dido is pursued by Aeneas, a Trojan prince who is shipwrecked in Carthage after a violent storm sets him off course. Aeneas, played by senior Joshua Keyes, promises to sacrifice his plans for Dido’s love but she is hesitant to give her heart to him.

Dido’s confidante Belinda, acted out by sophomore Kim Reed, and the ladies of her court played by junior Amanda LaPatka and Carmen Trujillo persuade their queen into accepting Aeneas proposal. Reluctantly Dido accepts, but only to find she will regret her decision.

Aeneas breaks his promise to Dido to stay in Carthage when a sorceress, disguised as a messenger of the Gods, reminds him of his duty and destiny. Played by senior Jessica Wotherspoon, the sorceress and her witches, played by sophmore Isela Martinez and freshman Jasmine Effner, triumph in their plans to break up the love between Aeneas and Dido.

Distraught at the revelation of his departure, Dido decides that her life is not worth living without Aeneas in it and poisons herself. Belinda cannot stop her queen from her suicide and is forced to see Dido die in her arms.

With its mournful ending came a cheerful applause as the audience displayed it’s gratification with the Opera House-like performance which had them intertwined within every scene.

The sets, props, and costumes added to the performance by providing a life-like scenery within every act.

Senior Dan Miyashiro who never attended an opera before, became a fan after attending Dido and Aeneas, “I was actually really impressed. I’ve never been to an opera or any social event like that and it was cool to actually see the people do the performing in a really well organized play.”

From a performers perspective, Martinez felt that the opera was effective but was upset at the fact that all the hard work was limited to a one night performance which lasted just over one hour.

“I think it was a success, but it’s sad we couldn’t do it more than one time, but otherwise we accomplished what we wanted to accomplish,” said Martinez.

Directing and conducting the opera was assistant professor of music Shawn Kirchner, who had the task of bringing the act, chorus and orchestra into one harmonious event.

The orchestra was made up of freshman Marjorie Marth, Danielle Cummins, Bruce Spalding, Kathleen Lamkin and Cynthia Fogg at violins, Rick Mooney at cello, and Kirchner on harpsichord.