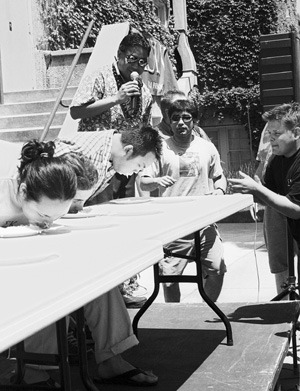 All Greek organizations gathered this week to celebrate Greek Week, which took place the week of May 5-11. Greek Week started on Saturday, May 5 with the barbecue and All Greek softball tournament from 2 to 7:30 p.m in which all fraternities and sororities competed against each other. Four teams were composed of 20 members each.

Greek Week continued on Monday with the All-Greek Olympics, which took place from noon to 2 p.m. at Ortmayer Stadium. The events included a pyramid competition, in which 10 people made a human pyramid and the top person had to hold up a flag with their letters for 10 seconds.

“I feel it’s a lot more organized than last year, there was more preparation, so therefore a larger turnout of Greeks,” said sophomore Sigma Kappa member Liz Lucsko. Lucsko was also a participant in the Greek Olympics.

Sophomore Sigma Kappa member Sarah Negrete, organized the events for the week with the help of a committee. She also did some research by checking out other fraternities and sororities of other universities for what they did for their Greek Week. She also added new events, such as the community service day and the volleyball game.

An ice cream eating contest also took place from 12:15 to 12:30 p.m. in the quad. A KULV DJ was in attendance playing music.

On Wednesday, 20 members gathered for Community Service Day. Students headed to various local elementary schools to tutor students there. Another event that took place Wednesday night was a bowling at Chapparal Lanes in San Dimas.

Yesterday, from 10:30 a.m. to noon at La Fetra Hall, three speakers addressed those in attendance. One was Don Flora, an alumnus member of SAE who spoke about some of his Greek experiences. A family feud game took place that day in the Quad.