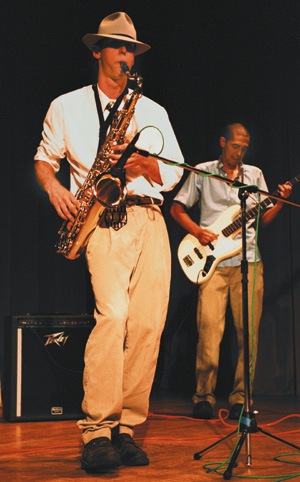 Jeremy Mears opened the African American Student Alliance’s Variety Show by playing the blues on the tenor saxophone. Chris Arbizu accompanied him on the bass. / photo by Tom Galaraga

The University of La Verne African American Student Alliance (AASA) presented a variety show in Founders Auditorium on Friday, May 11.

AASA brought together 11 different acts that were judge for creativity, professionalism, coordination and overall appearance by five judges.

The participants of the show were students from Pomona, Los Angeles and ULV. There was a variety of rap, blues, R&B, dance crews and poetry.

The show began with a 20-minute delay because of technical difficulties.

Throughout the show audio continued to be a problem that did not allow the audience to enjoy the music of the performers.

Niño Dionaldo, a Claremont Colleges student said, “They were very unorganized, which made the show long and boring. The only thing I enjoyed was that we had the liberty to yell out loud to express if we like the performers or not.”

The show started with the band Blues Machine that sang “Cross Roads” to the rhythm of blues. There were three performances of poetry by De Angela from Pomona, Boss No No “Ghetto Poetry” from Los Angeles and La Velle Wilson, a teacher from Notre Dame High School, who also sang a rap song. There were seven rap performances.

The first performer was Dnitty “Haters.”

The second performers consisted of two gentlemen who called themselves the 108 Draguns.

The other rap performers were three gentlemen who called themselves Bay LA. The Illuminatives were two men from Pomona College who got kicked off the stage for profanity.

The Royalties were rappers, for which Dionaldo said, “I did not understand what they were singing. The audience, as well, was yelling out loud that they sucked.”

The Undadogs were the last act of the night and did not have much of an audience. By the end, the auditorium was almost empty.

RC was an R&B singer who sang “Forever More.” There was a dance crew as well by the name of Shades of Brown which danced to a music medley.

Freshman Jasmine Effner said, “The show is going too slow, the spokesperson pauses to much, but I have enjoyed the variety of music.”

The winners of the variety show by decision of the judges were for creativity, De Angela; professionalism, Wilson; coordination, Shades of Brown; and overall appearance, Bay LA. All the winning groups received a trophy.