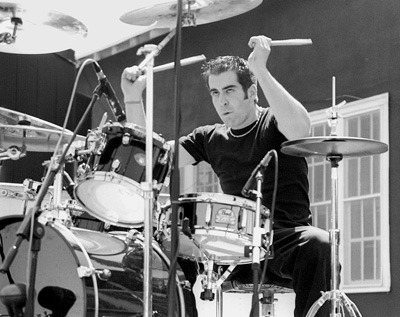 Elmo Marks of the band limitpoint, played at the Associated Student Federation (ASF) Forum’s benefit punk show. limitpoint is a three-piece punk rock band formed in 1999 is from Pasadena and has played with other punk rock acts such as Strung Out. / photo by Tom Galaraga

The event, which was originally scheduled for March 2, was postponed due to confusion and miscommunication between the show’s coordinators and city officials.

ASF took the necessary measures outlined by the city in order to hold the show. They received approval from the La Verne Police and Fire departments, and after a mandatory meeting with city officials, received final approval for the event to take place.

Sophomore Chris Jones served as one of the coordinators of the event. He helped plan and implement the show along with ASF. He said he feels the show on Saturday was successful, however the number of people in attendance was not as high as they anticipated.

Due to the postponement, many of the originally scheduled bands were not able to perform.

The bands that were present for the event included Off the Record, Bueno, Stranded, Slimer and limitpoint.

Jones said they received a large number of donations from the people who did attend the event. Jones said people donated clothes and canned food, which will be given to the Union Rescue Mission in Los Angeles.

A raffle was held where skateboards, T-shirts, hats and a snowboard were given to the winners. The prizes were donated by ACTIVE ride shop in San Dimas.

Jones said he has heard positive reactions about the show from those who attended. He said that despite all of the hassle that occurred with the city, he is still glad they were able to hold it.

“We’ll definitely do it again in the future,” he said. “It will be easier because now we know everything we have to do and what to expect.”

Jones said he felt the city was able to see that the event was not as bad or loud as they thought it would be, and that it was a successful event.