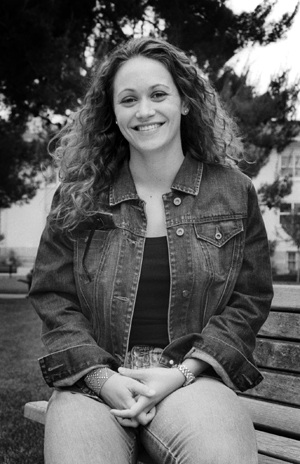 Amanda Holthouse, a fourth year biology major, has helped the Financial Aid Office assemble a financial aid packet for students. Her concerns with aid package mess-ups led to her involvement in the new forms. She hopes to make the process of applying for and getting financial aid more manageable for all students. / photo by Amy Babin

After repeatedly being frustrated by the financial aid process, junior Amanda Holthouse decided to plan an open forum for students to voice their financial aid concerns.

In the forum, students will have the opportunity to talk to Mary Lindsay, director of financial aid, about the problems they have been facing with the financial aid process.

“I feel that it is important for us as students to get involved in our education,” Holthouse said.

“If we don’t speak up about the issues that we have with the Office, they can’t or may not even be able to make the necessary changes that directly affect us.”

Holthouse went through many problems with financial aid and began to see major patterns with her case and those of other students she talked to.

“The patterns show me that these problems have been around for a long period of time and something needs to break the cycle,” she said.

Problems that Holthouse faced ranged from not receiving her refund check until the end of the semester or until the summer, to not having her financial aid package properly adjusted this semester.

At times she was forced to come up with a $1,000 more that she expected to cover her tuition.

Holthouse has been planning this forum for the past month and a half.

Pat Coleman, vice president of enrollment was the first person she spoke to about her idea of the forum.

Coleman then put her in contact with Lindsay, whom she has been working with side by side in planning the forum.

Currently, Holthouse and Lindsay are planning to form a student task force that would meet once a month or so to discuss changes that are being made with financial aid.

“I want to increase communication between the students and the financial aid department, and give students a chance to have someone in the department to listen to the problems that they have had with the office,” Holthouse said.

“I hope that this type of open forum will allow Mary Lindsay to hear our suggestions, and we can help her to make some necessary changes to better the financial aid system,” she added.

Holthouse believes that the financial aid office needs to work on communication within the office, as well as with students.

“They need to streamline the process in order for the system to move smoothly again and in a timely manner,” she said.

To promote the forum, posters will be placed in the Student Center. Fliers will be posted this week and put in student mailboxes.

“I will personally be approaching people to inform them of the forum and asking for their names,” Holthouse said.

“I think having an open forum about this situation will be very beneficial because it will enable us to talk more freely about problems we might be having with financial aid,” said Xochitl Garcia, freshman.

“It is our responsibility to speak up, and I hope that students take advantage of this opportunity and get involved,” Holthouse said.

“If all goes well, this forum will only be necessary this one time, and the student task force will form and enable us to communicate with the financial aid office directly more often than once a year,” she said.