By Blanca Rocha, Nila Priyambodo on March 5, 2004 in News 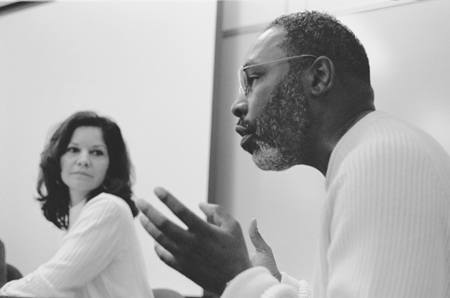 Raymond Scott, associate professor of psychology, addresses the need for women’s studies as a major at the University. Scott, the advisor for the Rainbow Alliance, participated in a panel discussion on gay, lesbian, bisexual and transgender issues in the classroom sponsored by the Coalition For Diversity. Other panelists included Leticia Arellano, who discussed improving methods for teaching about diversity. The next discussion in the series will be March 16. / photo by Blanca Rocha

The Coalition for Diversity presented a panel discussion called “The Open University: Gay and Lesbian Issues in the Classroom” last week.

The discussion was the first of three presentations focusing on the issues surrounding gay, lesbian, bisexual and transgender students and faculty.

“The coalition deals with the quality of life issues for all persons on campus and whatever current and relevant issues arise in any given year,” said Mary Prieto-Bayard, associate professor of behavioral science and co-chair for the Coalition for Diversity.

“But this year, I decided to, as part of our efforts, focus on GLBT students, faculty and staff members here at ULV and deal with gay and lesbian issues in the classroom.”

Four faculty panelists had free reign to deal with issues of gay and lesbian lifestyles, including sexism, heterosexism and homophobia, which was later followed by a question and answer period.

“Often the faculty is not sure how to deal with remarks or beliefs that, by implication, are deeply offensive to the GLBT population,” Bayard said. “This will give each panelist an opportunity to share their ideas, raise some provocative issues and stimulate an interactive process with all who are in attendance.”

“The fact that students wanted to be there, argued the case for why students should be included in the discussion,” Wagoner said. “It signaled that there is a need to address the issue more fully on campus, that we have not done enough and that there is much more to do.”

Bayard said that the panelists had specific reasons for participating in the discussion.

“I am a strong ally of the GLBT community and it is important for me to offer my support,” Arellano said. “I want to discuss some of the challenges in the classroom and help students address their own homophobia.”

In addition, Neidleman said he wanted to “raise awareness of diversity and have others acknowledge the issue without rejecting it.”

Kent participated in the discussion because he feels these issues are significant in current American politics.

According to Bayard, the discussion had an overall positive response.

“This is just the beginning of an on-going dialogue that is critical for everyone in the ULV community. We have always considered diversity to be an inclusive term.”

Future presentations by the Coalition for Diversity include “Spirituality and Sexuality” and “Issues, Theories and Models.” For more information call ext. 4178.