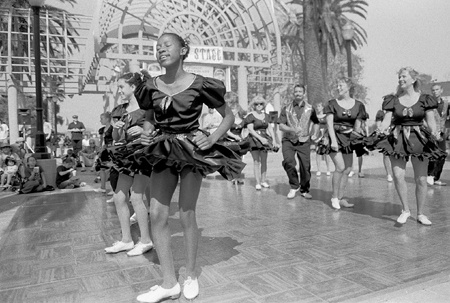 Fourteen-year-old Nadia Joseph attended the Irish Festival as a member of the Cripple Creek Cloggers Irish dance team that performed Saturday at the Fairplex in Pomona. Joseph and other members of the dance team have participated in a number of competitions. The festival also offered other events including a bagpipe parade, several Irish dance performances and shopping. / photo by Adam Omernik

Throngs of people mobbed the Fairplex last weekend to celebrate the culture and community of Ireland at the second annual Irish Fair.

It’s about “fun and festivities,” said Debbie Scheibel, a spokeswoman for the fair, who added that the event is designed to evoke authentic Irish culture.

More than 20,000 people gathered to listen to storytellers, live music and feats of strength at one of the largest festivals of its kind in Southern California.

The fairgrounds were full of booths selling traditional Irish food, hand-made crafts, products from Ireland, and, of course, beer and ale. The air was filled with the sounds of traditional Irish music and some Scottish flair courtesy of bagpipers.

There were also many Irish dance teams, with both adults and children drawing crowds as they performed outside. For children, the Irish Fair offered pony rides, a petting zoo and storytellers.

There were also demonstrations of traditional Irish activities such as sheepherding and an Irish athletic contest. The sporting events were put on by the Scottish American Athletic Association.

Several different types of Irish music could be heard at the fair, including traditional Irish and Celtic music, with live music from the 42 Highland Pipe Band playing the bagpipes and dressed in traditional Irish kilts.

At some of the 120 vendors present, people could find information on their families’ last names.

Donna Sweeney, who came to the fair for shopping and food, found information on her Irish surname.

The festival attracted many visitors. While some heard it advertised on the radio or saw it on TV, others came because they are of Irish decent.

Organizers are already beginning to plan next year’s fair.

The fair, attendees agreed, was a good way for people to experience the Irish culture, with so much to see and do.