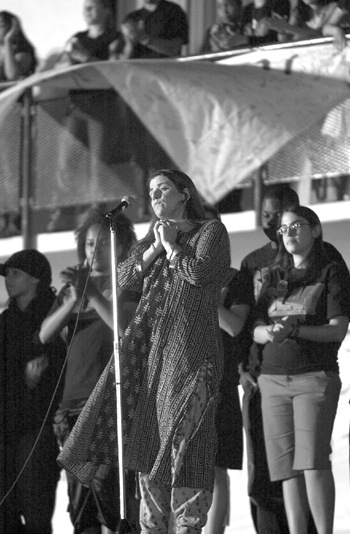 Claremont McKenna College professor of psychology Kerri Dunn addresses the crowd after classes were cancelled at all five Claremont colleges Wednesday following a series of race-related incidents, culminating in the vandalism of Dunn’s car Tuesday night during a talk on “Free Speech vs. Hate Speech.” The police and FBI are investigating the incident as a felony hate crime. / photo by Adam Omernik

Dressed in black and chanting slogans of unity, more than 2,000 students and faculty from the five Claremont colleges converged Wednesday night in a rally to protest an apparent hate crime at the campus Tuesday.

Students carried signs saying “end the hate” as they marched to Claremont McKenna College from the other four campuses.

“This is not only a response to the hate and violence but a concerted effort to reclaim our community,” said Marc Bathgate, student body president-elect of Claremont McKenna.

“We want to bring people together to support each other instead of sitting in their rooms,” said Pomona College President David Oxtoby.

College presidents shut down the schools on Wednesday, the day after professor Kerri Dunn’s car was vandalized and covered with racist and sexist epithets – an incident which happened while she spoke at a community forum on hate speech.

“This was vicious,” said Claremont Police Sgt. Paul Davenport. “Not something we are used to seeing.”

Davenport said Wednesday that the department had no witnesses or suspects, but were investigating the matter as a felony hate crime and were working with the FBI. The incident was the latest in a pattern of race and sexuality based occurrences on the campus.

“It all started with the burning of a cross, which was stolen from the Pomona College campus in January,” said Marney Scotten, a Pitzer sophomore, on Wednesday. A group of students stole an 11-foot cross – part of an art project at Pomona College – and set it ablaze in front of a dormitory at Harvey Mudd College.

Oxtoby said that after the students turned themselves in, an investigation by the school found that the act had nothing to do with race and was not a hate crime.

Last month school officials censured a group of students for holding a scavenger hunt that asked participants to collect photos of 10 Asian students on campus.

“There have been issues in the past, like things written on walls,” Oxtoby said of homophobic graffiti that has appeared on campus.

Many students said this was not something they expected.

“It’s surprising,” said Kathryn Bodel, a junior at Pomona College. “Not what you expect at a liberal arts college.”

Senior Liz Heinz said she was unaware of intolerant behavior at the school until this week’s incident. “It’s too bad it had to take something so in-your-face to bring it to attention,” she said.

Dunn appeared at the rally and expressed gratitude for the support she has received.

“If you confront these people, they would deny it because they are cowards,” she said.

Student speakers criticized school administrators for not taking these concerns more seriously in the past.

After the cross-burning in January, Pitzer College held a forum discussion. “The person representing Scripps College did not show up because he stayed at home to watch the Lakers game,” said Blythe Baldwin, a Pitzer sophomore.

Claremont McKenna is offering a $10,000 reward to anyone with information that leads to catching the perpetrators.

Jose Calderon, professor of sociology and Chicano studies at Pitzer College, said these types of incidents are happening because of today’s climate of fear. “Ever since 9-11, there has been hate towards Middle-Easterners,” Calderon said.

“There aren’t enough jobs and immigrants are being blamed for these problems.”