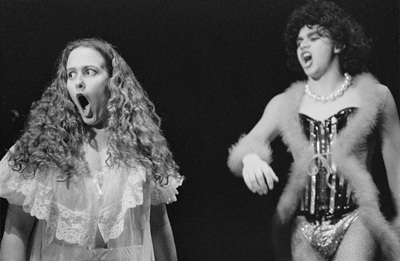 In the second act, Janet Weiss (played by Sara Kirk) learns of Dr. Frank N Furter’s (Jonathan Serret) evil plans of seduction in “The Rocky Horror Show.” The play, directed by Steve Kent with musical direction from Scott Farthing, invites audience members to participate with props, costumes and by shouting out catch phrases that compliment the plot. The production opened Oct. 30 and will continue through tomorrow night. / photo by Adam Omernik

Excitement and anticipation rippled through Dailey Theatre on opening night of the University of La Verne’s music and theater arts department’s presentation of “The Rocky Horror Show” last Thursday.

The stage design immediately told the audience that this was no ordinary production. Left of the stage, cameras operated by “Video Vixens” pointed to the narrator, Samantha Kern, who was dressed appropriately with Elvira’s signature wig and provocative dress against a candelabra background.

Three screens hung above the stage, projecting these images for the audience. To the right of the stage, a live band was set up for the show.

With a few attention-grabbing props and relying on the expert facial expressions and talent of the actors, the story of Janet Weiss (senior Sara Kirk) and Brad Majors (James Darrah) getting a flat tire and stopping at a castle for help was underway.

The audience was hooked. Following the suggestions from Elvira, everyone used the props set out by the department to encourage audience participation in the tradition of the original cult classic, “The Rocky Horror Picture Show.” Newspapers, for example, protected the crowd from a simulated rain storm encountered by Janet and Brad.

Junior Melissa Stahly, a member of the quartet that accompanied the band, said that the props brought additional interest for the audience.

When Janet and Brad are greeted at the door by the hump-backed Riff Raff, played by Anthony Guerrero, who acted more like a rabid animal than a person, the audience knew they were in for a wild ride.

Seconds later the stage was littered with a chorus of the scantily clad minions of Dr. Frank N Furter, the eccentric leader of the transsexual “Transylvanians,” who mysteriously inhabit the castle.

After a wildly enthusiastic round of “The Time Warp,” the dance made popular in the original “Rocky Horror Show,” the center of this transgender world is introduced.

Dr. Frank N Furter, played by sophomore Jonathan Serret, struts onto the stage in dangerously high stilettos, wearing a large wig and donning nothing more than a corset, a thong and fishnets. Talk about shock-value.

Janet and Brad tremble nervously in the corner until they too are stripped to their underwear by the Transylvanians.

Enter Rocky, Dr. Frank N Furter’s own boy-toy. Why go through all that trouble finding the right man when he can make one, he sings. Rising from the operating table, Rocky, played by Christopher Smith, jumps into a rendition of song with an Elvis-like swagger and husky crooning.

Wearing nothing but a loin cloth and a smirk, Rocky pumps up the excitement of the Transylvanians, and the audience, by flexing his toned body.

By intermission, the energy emanating from those on stage had fully worked the audience into a “Rocky Horror” frenzy.

Not even the minor audio problems that often muffled the singing seemed to phase the crowd.

Bonita High School juniors Sheena Sharma and Jamie Watkins, who heard about the production through their school’s newspaper, were more than enthusiastic about the show.

Brian Smith, who was there to support his son, Christopher, said the show was great.

“Rocky’s my son; he got his body from his father,” he said.

“I had an inkling that we had a real success,” Kent said. “It well exceeded my expectations.”

Sophomore Brianna Roth’s portrayal of Magenta and sophomore Whitney Wickham’s Columbia added to the success of the production.

“The Rocky Horror Show” will end its run with shows tonight and tomorrow at 7:30 p.m.

Constituent access compromised
Still winless after all these games