By Adam Omernik, Michelle Loggia on November 19, 2004 in LV Life 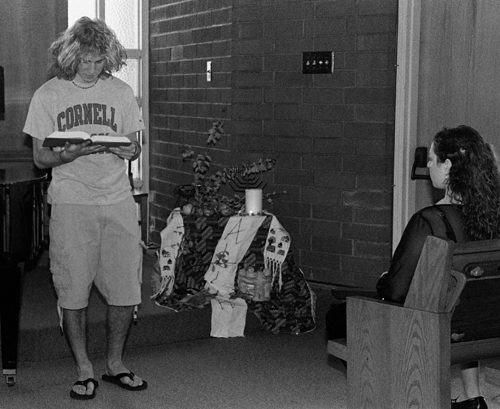 Sophomore Kevin Schatz reads from Hebrew scripture at the University of La Verne’s Thanksgiving service, held Wednesday. The event, hosted by Campus Minister Debbie Roberts, was open to all religious denominations and took place at the ULV chapel where a small group gathered to pray, light candles, listen to the women’s choir and give thanks. / photo by Adam Omernik

There are many groups around the University of La Verne campus with different focuses, goals and members.

There are a number of sororities and fraternities, a Republican club and even the Rainbow Alliance at the University. But on a campus which was founded by members of the Church of the Brethren, there is no formal religious club.

Religious groups are not a requirement on college campuses, but there usually exists at least one.

Many private and public colleges and universities have religious clubs that operate on campus, however, this University does not.

Instead, given the small size of the University and the commitment to community present at this school, the campus ministry does work to provide some aid to the spiritual needs of the diverse student population.

“At the beginning of the year, we put together a program of what students want,” Campus Minister Debbie Roberts said.

Research about what students want on campus in regard to their faith is collected from an informational survey, which students can fill out at the beginning of the year.

The questionnaire is sometimes distributed in registration packets and is always available at the campus chapel.

The goal of the survey is to assist administrators and those involved in campus ministry in thinking of new and successful ways to assist students in expressing their various traditions and faiths.

The campus ministry wants to support the University’s goal of spreading acknowledgement of diversity among communities by encouraging students in their various forms of religious expression.

In fact, the University’s mission statement in regard to community and diversity “encourages students to understand and appreciate the diversity of cultures, which exists locally, nationally and internationally.”

This may be why there are no faith clubs on this campus.

“We are not a club, we are a community,” Roberts said. “We like the word ‘community’ better than club.”

As a community, students of any faith can attend interfaith meetings and events and share their faith traditions with their peers.

“We want to keep communication open between all faiths,” Roberts said. “We also don’t want splits in traditions that may conflict with each other.”

That is one reason why groups like Campus Crusade, which have chapters on many other college campuses, do not operate on this one.

However, such a club does provide a purpose, even if it is one that this University does not deem necessary.

“The purpose of Campus Crusade is to offer students of faith a group of peers that wish to abstain from common campus temptations like drugs, alcohol and sex,” said Tisha Waki, a junior organic chemistry major and member of Campus Crusade at the University of California, Berkeley.

Another reason Campus Crusade does not exist on this campus is because the University is such a small school. Large religious groups such as Campus Crusade have directors who are paid to work on college campuses.

Having to pay directors to run this religious organization would require that members pay fees for joining.

“We don’t want there to be any fees,” Roberts said.

Although students on this campus may find that they are lacking the bonds of closeness found in some religious clubs on other campuses, the campus ministry at ULV offers students many other services pertaining to various religions.

Many students are not aware of the services provided by the campus ministry, and therefore, they do not take advantage of all that are offered.

But the campus ministry, however, continues to support students and their religious needs.

“A couple of years ago, some Islamic students came to me because they needed a private quiet place to do their daily prayers throughout the day,” Roberts said.

“We offered them the peace loft because it is more private than the chapel,” she said.

Also, students who live on campus and are away from their regular church may find some comfort in a prayer group or other event hosted by the campus ministry.

Students who cannot make the commute back to their home church weekly, are more than welcome to find comfort through the campus ministry and the students and faculty involved.

Perhaps, now more students will look into the services offered by the campus ministry.

Even without an on-campus club to support their religious needs and wants, they can still find religious involvement.

The campus ministry provides many outlets for interested students to learn and share each other’s faiths and traditions, without a club membership or having to pay any club dues.

Michelle Loggia can be reached at msloggia@aol.com.