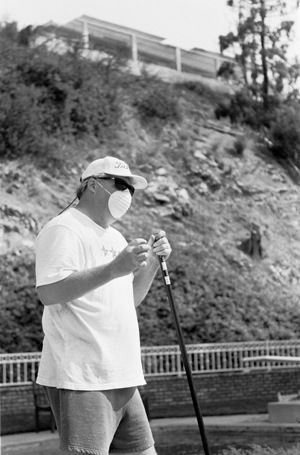 Mike Stockham, a resident of Claraboya, takes a break from sweeping the ash from his driveway Monday to survey the damage just behind his house. The hillside in the background was completely torched by the fire while several houses up the hill were also damaged. / photo by Adam Omernik

Ten days into the largest and most destructive fire in California history, the La Verne community is reeling from rattled nerves and personal loss.

A few miles from campus, 16 Claremont homes have fallen prey to the voracious wildfires that now span five counties as the blinding damage toll of the raging inferno continues to rise.

“Nobody can control something like this,” Martin said as she marveled at a few of her belongings that survived the flames ­ two intricate glass statues and a pile of maimed silverware.

Martin’s family built their Valparaiso Drive home in 1965. Martin’s son, Brad, a La Verne College alumnus, fought the fire until he was forced to leave.

“A lot of memories in this house,” Brad Martin said as he took a break from digging through the ashes; his mother was making a laundry list of possessions for her insurance claim.

At around 4:30 a.m. Sunday, Brad Martin watched as these remembrances were engulfed in flames.

Several other members of the ULV family were displaced or disturbed by the fires, with most of those evacuated able to return to their homes Monday.

English Professor Bill Cook has been kept away from his Crestline home in the San Bernardino mountains all week, as the fires turned north heading for those communities by Monday.

Cook, sporting a wardrobe noticeably less formal this week, has been staying with his family at the Ontario Airport Hilton while under evacuation orders from their home.

“I don’t know if it’s there or not, they won’t tell me,” he said. “I only took a couple pairs of jeans and some Dockers, thinking I would only be down for a couple of days. When you’re leaving under these circumstances, you think more about the things you just can’t replace.”

The Claraboya abode of President Stephen Morgan ­ although dangerously close to the flames ­  suffered no damage.

In the more than 725,000 acres of fires ­ from Simi Valley to San Bernardino south to San Diego ­ at least 2,600 homes have been destroyed and at least 20 lives have been lost since the first plumes of smoke climbed into the sky above Fontana 10 days ago. With a quartet of wildfires still burning out-of-control across Southern California, those numbers are expected to increase.

Along with the 16 homes destroyed in Claremont, an offshoot of Fontana’s so-called Grand Prix fire damaged an additional 13 residences there.

In total, 3,000 acres in and around Claremont were destroyed, said city spokesman Mike Maxfield.

The fire burned capriciously through Claraboya, an upscale neighborhood in the Claremont hills, sparing some homes, while randomly reducing others to fuming piles.

“I don’t know how it picked these homes,” said Mike Stockham, whose house saw little damage besides a few burns on the roof and a swimming pool murky with ash.

It was more than whim or fortune that saved some residences.

In the six-to-seven weeks preceding the wildfires, Jim Curl and his wife, Jane, had cleared more than 90 tons of brush from their side and back yards, an effort that probably saved their home. 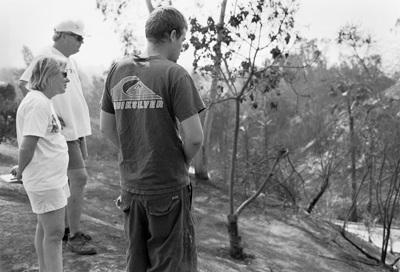 Jane Curl, son Steven and neighbor Mike Stockham stare in amazement at the scorched 40-50 foot ditch situated just to the back of their Claraboya home. The Curls moved into their house around Aug. 1 of this year. For the six-to-seven weeks preceding the fire, they cleared 90 tons of brush from their yard. Their house suffered no damage, although some neighbors were less fortunate. / photo by Adam Omernik

“It didn’t have anything to burn here,” Jane Curl said.

Stockham’s next-door neighbor Patrick Leier and his wife Tobie had also recently cleared a considerable amount of brush from their backyard. The wildfire charred homes just above and below Leier’s but left his alone.

“If we didn’t have the chaparral removed, this house wouldn’t be here,” Leier said.

Leier likened the fire to plasma in that it flowed through houses and yards, bouncing off anything it couldn’t burn and moving on as quickly as it came.

The Leiers and about 100 of their neighbors watched the fire from Higginbotham Park, saying the mood of the unusual gathering was “more disbelief than anything.”

According to the majority of Claraboya residents, watching the fire wreak havoc from afar was nearly unbearable.

“It’s a helpless feeling. At one point, I just wanted to sprint up here, run past the police, do something,” Stockham said.

“We actually watched what we thought was our house go up in flames,” said Carrie Basham, Curl’s stepdaughter. “We thought it was destroyed.”

“Everyone called their home phones,” said Al Cangahuala, Martin’s next-door neighbor. When there was no answer, we assumed the worst.”

Nancy Warner, a Claremont resident who lives farther down the hill, recalled watching one couple in hysterics while waiting.

“One lady, she was crying. She was evacuated,” Warner said. “She had her hands to her eyes. She was so sad. I just hope they didn’t lose anything.”

Some residents chose not to heed the evacuation call, and stayed to fight the flames away from property.

Rodney Hutchison, a Claremont contractor, said he won an exhaustive 14-hour battle to protect six homes on Mountain Ave ­ homes he does not even own.

“These are my friends,” Hutchison said. “I have an interest in saving these houses.”

According to Hutchison, fire crews extended every effort to protect homes that were burning, but the other major fires in Southern California had stretched their numbers thin.

“They were fighting it with everything they have,” he said of the home that was destroyed next door despite a three-hour battle. “This thing came up here like a chimney, with a wall of flame 75-feet high.”

Curl helped two firefighters douse flames in his backyard. Afterwards he went across the street to Stockham’s house and put out flames beside his house.

“The reason we have a house today is our neighbor,” Stockham said.

Amateur firefighters had to make do with what was available. Water service is provided by Southern California Water Company, which uses electric pumps to get water to the hillside residents.

“We were up here right away with backup generators,” said Drew Williams, a water company employee making rounds in Claraboya on Monday.

“You have to be mindful of the water pressure up here,” Hutchison said.

Alternating between shoveling out impromptu fire-breaks and manning garden hoses, he turned off the hose regularly to free up water pressure for others.

Claraboya residents returning to their homes Monday were welcomed back to a changed neighborhood. The Curls stood in their backyard and stared in awe at a deep, charred ravine at their feet. Since moving there in this summer, the Curls thought the bamboo-choked gully was only a shallow ditch. In fact, the fire ravaged so much foliage, the neighborhood was almost unrecognizable to its residents.

“I’m seeing homes that I haven’t seen before,” Stockham said.