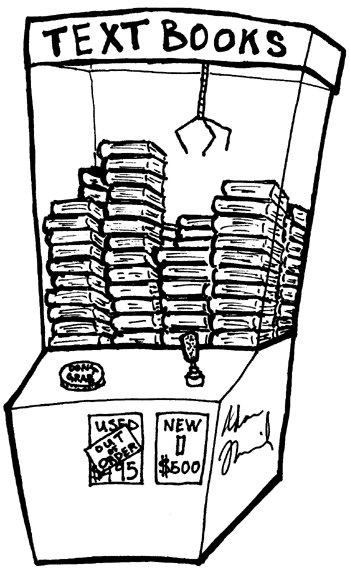 Textbook prices are too high and will continue to rise, according to a recent report by a California student advocacy group.

While that conclusion is little surprise to college students, who are expected to spend an average of $843 on books this year, it has fueled calls for action in Sacramento.

Aiming to change how textbooks are sold, State Assemblywoman Carol Liu (D-La Cañada Flintridge) said she plans to introduce legislation to throw the book at publishers and curb soaring prices.

“My legislation will encourage publishers to provide unbundled materials, require explanations of changes made in new editions, and ask that faculty consider price when making textbook selection decisions,” Liu said.

Many textbooks include supplemental materials, such as study guides and computer software, which the CalPIRG report claims are rarely used and double the price tag.

Publishers claim there is demand for the bundles.

“We add new value to college course materials by including innovative and updated additions to the printed material,” said Star Salemi, spokeswoman for Harcourt, Inc.

Publishers blame rising production costs for the steep price increases over the past decade.

According to the National Association of College Stores, publishers receive about 64 cents from each dollar spent on textbooks, half of which covers materials, printing and editing costs.

While it is true that paper and ink prices have skyrocketed over the past several years, it does not explain why new textbooks are sold overseas for substantially less.

Many identical texts, or virtually identical “international” versions, sell overseas for half the price of their American editions.

Students enrolled in Chemistry 312 this semester bought Organic Chemistry by Francis Carey. If they went to the La Verne bookstore, they paid $145 for a new copy, while Amazon.com sells the book with a CD-ROM for $151.95. Had they surfed over to amazon.co.uk, an unbundled version of text is available for approximately $50.

While bookstores offer used textbooks at reduced prices for students, publishers have undermined the system.

Textbooks used to have a four to five year life cycle, but new editions are now printed twice as often.

According to Melvin Miles, assistant professor of chemistry at ULV, the frequent changes are unnecessary.

“The changes are not that much,” Miles said. “The homework and exercise change, so students have to buy new workbooks, but the material in the chapters does not.”

These frequent reissues undercut the used book market, as few enter circulation before a new edition renders them obsolete.

An abbreviated shelf life contributes to the sticker shock, as publishers must increase prices to recoup the same expenses and profit margins in a shorter amount of time.

Although the CalPIRG report points a finger squarely at publishers, it suggests that university faculty could be more sensitive to their students by taking a more active in textbook selection.

CalPIRG said more than 75 percent of responding faculty members said that many of the new editions were not academically justified.

Some instructors, however, welcome the frequent updates. Sarah Johnson, associate professor of physics, appreciates the revised questions and exercises they typically include.

Responding to the CalPIRG report, President of the Association of American Publishers Patricia Schroeder said it was incorrect and irresponsible.

“Student spending on new and used course materials has risen between 3 percent and 4 percent annually over the years – a far cry from the double-digit inflationary spiral your report would have us believe,” Schroeder said in the letter.

Schroeder added that by faulting publishers, the report deflected attention from “the current crisis in higher education in this country.”

From ordering used copies online to mail-ordering inexpensive new copies from out of the country, college students are finding ways to avoid sticker shock in the bookstore.

Here are some suggestions for faculty to help with the problem:

• Dig deeper: Find out what the retail cost will be for that complimentary review copy sent by the publisher. Remember that elaborate graphics are not what students need. Content is crucial, as is price. Appearances rank low in utility for students.

• By the Book: Meet ordering deadlines as indicated by the bookstore. Orders placed after this deadline incur costly rush delivery fees, which end up factored into the sticker price. Ordering early allows the store to acquire a better selection of used texts.

• Get off the page: Find online materials that are free for everyone. Fewer books translate into fewer graduates needing chiropractors. Although equity issues with internet access are low at ULV, consider photocopying non-copyrighted material online if it is an issue.

• Stick with it: Use the same text for at least two years; preferably three. This expands the used book market, and may reduce the incentive for publishers to print frequent revisions which often have insignificant changes, but cost significantly more.

• Share the love: Expand the use of library reserve desks. Put extra copies of a text, such as those borrowed from colleagues or given by publishers, on reserve at the campus library so that students have greater access to materials.

• Flex your muscles: After completing your next important screed, negotiate with your publisher on what the book will cost. When Addison-Wesley published “An Introduction to Thermal Physics,” Daniel Schroeder of Weber State University in Utah put into his contract an agreement to keep the price down. He went so far as to take a cut on his initial royalty rate to make the book a downright affordable $31.