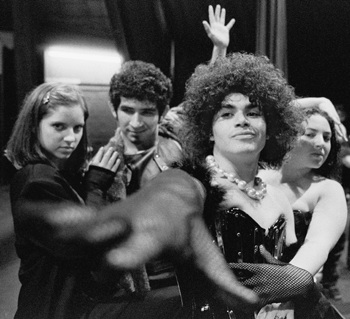 Magenta (Brianna Roth), Riff Raff (Anthony Guerrero), Frank N Furter (Jonathan Serret) and Columbia (Whitney Wickham) appear in The Rocky Horror Picture Show opening on Oct. 30. Participation in the production is encouraged for audience members. They are invited to wear costumes, shout catch phrases at the characters when appropriate and bring props (or use those provided for a fee) to throw on stage. / photo by Adam Omernik

For almost three decades, midnight showings of the “Rocky Horror Picture Show” have been an open portal seducing generations into the realm of sweet transvestites from Transsexual, Transylvania. It is the definitive “cult classic” full of in-jokes and obscure trivia that has taken on a life of its own.

But why for so many years has “Rocky Horror” intrigued audiences around the world? And how did this phenomenon come about?

Written by Richard O’Brien, the “Rocky Horror Show” began as a small stage production at the Royal Court Theater in London, England in 1973, and focused on an all-American couple named Brad Majors and Janet Weiss, who leave a wedding reception on a dark and gloomy night, get lost after their car breaks down and find themselves at a Frankensteinesque place. Once inside the eerie castle, Major and Weiss are propelled into the wacky world of Frank-N-Furter, a mad transvestite scientist, who was in the process of presenting his greatest creation, Rocky Horror.

Directed by Jim Sharman and produced by Michael White, the play opened to rave reviews and packed houses night after night.

After attending one of the shows, producer/songwriter Lou Adler immediately secured the American rights to the play. He premiered his Los Angeles version at the Roxy in1974 and set the stage for the film version, “The Rocky Horror Picture Show,” produced by Twentieth Century Fox. Before the film debut, the “Rocky Horror Show” had a short stint in New York at the Belasco Theater. The bad reception in NY made some Fox executives nervous, but the film was eventually released to a limited number of theaters in 1975 and flopped.

However, Adler noticed that every week the same people would come back to watch the film, singing and dancing along with the characters. It was then edited, re-released and spawned into a midnight cult-classic.

Audience members came in numbers dressed as film characters, reciting lines as a way of interacting with the plot. They would act out the lines in front of the movie screen and dance to the “Time Warp,” the film’s most popular song. The dance involved a jump to the left, step to the right, pelvic thrusts and hip swivel. “The Rocky Horror Picture Show” also became an interactive experience where everyone came equipped with props related to scenes in the movie.

The film veered from the image of traditional heroes, but offered ones that audiences could identify with, and it explored the invasion of objectionable and unordinary concepts into reality.

“Fantasy is about the shattering of reality. The reality can be this world, as it is in “The Rocky Horror Picture Show,” or even an imaginary one. This reality must be completely ordinary and unexceptional,” wrote Elizabeth A. Allen on her Frankenstein Place Web site. “When the unreal elements explode onto the screen, the viewer and the characters are caught up in them because they are so different.”

The film also defines the midnight show by offering a form of escapism for many, said Whitney Weilbold, manager of the Nuart Theater in Los Angeles.

“It’s like a grown-up combination of dressing up and the Wizard of Oz, and we get to be among the players and be someone exciting and sexy for a couple of hours a week,” Viezel wrote.

“If you had stage fright or acting inhibitions before ‘Rocky Horror,’ once you’ve exposed most of your parts, darker side and wore enough make-up to get you arrested (in) Times Square for solicitation, you no longer suffer from stage fright,” Egic said.

“You could go to the RHPS and find instant acceptance. No one questions you; no one criticizes you; you just are, and that is good enough. It is like a family,” Gerrish said.