By Steven Falls, Veronica Garcia on November 5, 2004 in Soccer, Sports 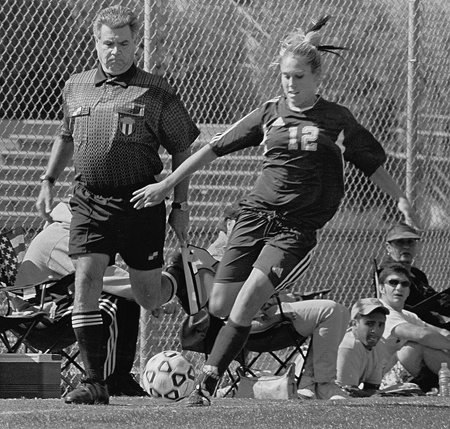 Linesman Paul Winders makes sure freshman Laura Larsen of the University of La Verne does not go out of bounds while she tries to score against Whittier in overtime on Saturday at Whittier. The Leopards tied the Poets, playing a hard yet frustrating game with 16 fouls against them. The Leopards finished the year with a 5-11-2 overall record and a 4-6-2 conference record. / photo by Veronica Garcia

The Leopards hoped to write a happy ending to their story for the 2004 soccer season.

ULV entered the game with a disappointing 4-11-2 overall record.

“We were just completely worn out as a team,” said senior defenseman A.J. Taggart. “We have a lot of injuries and not as many subs so it makes it difficult.”

Early on, the Athenas seemed to be here to spoil the party as they scored first only three minutes into the game.

From this point on, La Verne struggled to really develop anything offensively, a problem that has continuously resurfaced for much of the 2004 season.

With Britt’s help, the Leopards held Claremont at bay with excellent defense, something Britt credits the rest of her teammates for, and not just herself.

“Our defense does a great job in protecting me,” Britt said. “I had a good save at one point in the game where I knocked a shot over the goal for a save.”

Possibly the inspiration of the last game of the season gave the Leopards some needed boost going into the half.

Instead of sulking, the team was upbeat.

“We were having a lot of fun,” Britt said. “We wanted to win real bad for the seniors especially.”

Whatever it may be, the Leopards came out a different team in the second half, getting on the board in the 47th minute on a goal from sophomore Katie Ford, assisted by Mercedes Bermudez.

The goal brought ULV to a 1-1 tie and finally pushed them over the scoring hump they had been battling for some time.

With no scoring action in the rest of regulation time, the Leopards and Athenas headed for overtime.

With only 1:08 passing in overtime, junior Nataly Clavel used a free kick to knock home the game-winning goal and help write the final chapter of a disappointing but encouraging 2004 season.

Clavel has been a force on the offense for this team for the past few games but she seems to not really understand where this is all coming from.

“I really have no idea how I am scoring all of these goals,” Clavel said.

However she scores, head coach Wendy Zwissler must feel relieved that Clavel will be back next season as a senior.

In previous action, the Leopards fell, 2-0 to Cal Lutheran University on Oct. 31.

The game was played on Halloween due to the cancellation of their previous schedule match-up because of rain.

The Leopards also battled to a 0-0 tie with host Whittier the previous day.

With the season behind them, the Leopards have some needs that they need to address before heading into next season.

“We definitely need to recruit players for next year,” Clavel said.

ULV will lose six seniors to graduation and will hopefully return the remains of their undergraduate roster for the 2005 season.

With the games over the weekend and Wednesday’s victory of Claremont, the Leopards improved to 5-11-2 overall and 4-6-2 in conference play.

Steven Falls can be reached at sfalls21@msn.com.