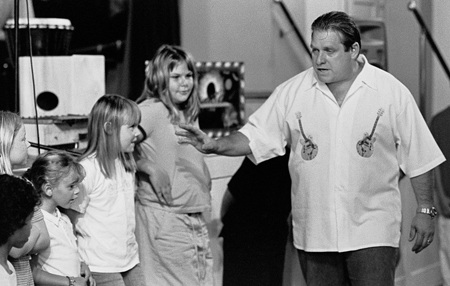 Jon Rothe describes rhythm, form and various other elements of music to visiting children Saturday in Founders Auditorium during the Kid’s Music Club. The experience gave children the opportunity to sing, dance and play with various musical instruments such as a xylophone, tambourine and flutes. Kids club is part of a series that the Music Department puts on for the La Verne community. / photo by Veronica Garcia

The Kids Music Club held its first concert of the year Saturday in Founders Auditorium. The second annual concert series kicked off with Jonathan and Cindie Rothe presenting “Bring Your Hands and Ears.”

“We had a good turnout, more than expected,” Biondo said. “It’s good to expose kids and have them participate interactively with the concert.”

The concert series is free and open to children from local cities.

The children sat back and listened to stories of how music was made. They interacted by making sounds of different animals to help them understand the concept of sound.

Rothe introduced the kids to three elements of music, which are rhythm, melody and harmony. He played songs for the kids and asks different questions of what they thought of the three elements.

The concert featured songs from Paul Simon, Johnny Cash and the Beatles. Lyrics were displayed on a projector screen so parents and kids could sing along.

The Rothes sang and played different songs as the parents and kids clapped along. Also joining the Rothes in the band were Music Department Coordinator Steve Biondo and Professor of music Reed Gratz.

The grand finale of the concert was when the kids got to play with different instruments. The instruments included maracas, bongos, flutes, tambourines, a xylophone and the triangle, to name a few.

“It was fun because I got to play with instruments, I played the clay pot,” said Matthew Alvarez, 9, a second year attendee from Ontario.

“Boom, boom,” said Joachim Gratz, 2, as he played his instrument.

The Kids Music Club provides exposure for children at young ages learn and understand the concept of instruments and music.

Rothe, an alumnus of the University of La Verne, has been teaching music to fourth graders at more than nine different schools. He also taught music elements at ULV for 14 years. Rothe received his bachelors of art in music in 1980.

“I want to expand the interest and horizon of children in music,” Rothe said.

Rothe and Biondo both stated that music is no longer being emphasized in elementary and middle schools because of budget cuts and these concerts give the kids an opportunity they may not have had there.

The concert series is free and open to children from local cities.

The next Kids Music Club concert is “Jammin’ Jazz with Reed Gratz” on Nov. 6 at 10 a.m. in Founders Auditorium. For more information on the concert series call the music department at Ext. 4915.

April Rojo can be reached at arojo@ulv.edu.