By Gloria Diaz, Steven Falls on October 29, 2004 in Sports, Volleyball 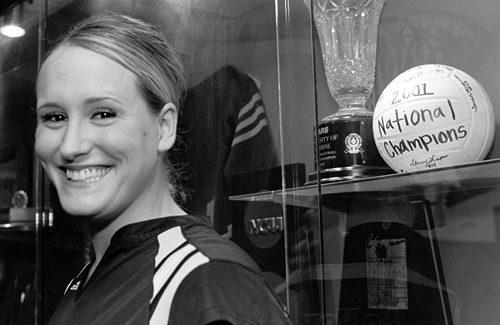 Senior Tricia Schary, starting blocker for the women’s volleyball team, has helped propel the Leopards to their 9-0 SCIAC record. Schary, who transferred from Cal State Los Angeles, a Division II school, said she looks forward to attending the NCAA West Regionals in Hayward. In her first year with ULV, Schary was named the 2003 SCIAC Player of the Year. / photo by Gloria Diaz

After three years of head-butting and constant miscommunication with her coach at Cal State Los Angeles, senior middle blocker Tricia Schary decided to transfer to the University of La Verne.

“The coach and I just had our differences,” Schary said. “I wasn’t happy, and it wasn’t worth it anymore.”

Little did the Leopards know what kind of gem had practically fallen into their lap, except for ULV head coach Don Flora.

“Coach Flora gave me private lessons before I was out of high school,” Schary said. “He recruited me really hard.”

At this point in time, the six-foot-one inch Schary was competing with her club team, Top Gun Volleyball, outside of high school. It was there where Flora discovered her.

During this time, Schary was a two-sport athlete at Glendora High School, just a few miles east of La Verne. She competed in volleyball in the fall, then with the track and field team in the spring, competing in events such as high jump, shot-put and discus.

Not only was Flora recruiting Schary out of high school, so were several other schools such as Cal Poly Pomona, Cal State Bakersfield and schools from Texas and West Virginia.

When it came time for Schary to make that dreadful decision on choosing her path for the next four years of her life, it came down to Cal State Los Angeles, and her sentimental favorite, ULV.

Schary’s early ties with the La Verne head coach had built them a trusting relationship that was going to be hard to surpass when making her college decision.

“Coach and I built a great relationship early on,” Schary said. “I trusted him fully.”

But when the options were put to the scale, the scholarship offer from Cal State Los Angeles was just too much to pass up.

La Verne was unable to make such an offer due to Division III restrictions by the National Collegiate Athletic Association.

“They were giving me a full ride, the only thing that wasn’t going to be paid for was food,” Schary said.

Comparing the attractiveness of this offer to the costly tuition payments of La Verne, Schary’s choice seemed automatic.

She was to become a Golden Eagle.

Schary red-shirted the first year of college, and then spent the next two years constantly grappling with the decision to come to Cal State L.A.

After quite possibly the longest three-year stretch of her life, Schary decided to transfer from Cal State L.A.

It was at this time where the light bulb went off in Flora’s head.

Due to his great relationship with Schary, and his continuous contact with her through her years as a Golden Eagle, ULV seemed the logical front-runner to land the powerful middle blocker.

“Coach kept in contact with me, and when it was time to make a decision, I just said why not, it only makes sense,” Schary said. “My parents told me that if this is what I want, then to go for it.”

“We had built a high level of trust,” Flora said. “She wanted to play for a coach what would give her consistent support, and consistent teaching.”

The rest is history, and as the cliché goes, good things come to people who wait.

Schary barged through the doors of the Supertents and immediately made her presence felt at ULV.

In her first season as a Leopard, Schary led the team in hitting percentage (.419), blocks (122), and kills (354). She was named Southern California Intercollegiate Athletic Conference player of the year for her efforts.

Despite her skills on offense, Schary’s size on defense is what really impresses Flora.

“She can absolutely take over a match defensively,” Flora said.

“She is a dominating force and a great motivator for our team,” senior outside hitter Amy Kratochvil said.

Schary’s contributions led her team to the Final Four where they were eliminated by eventual Division III champion Washington University.

Hoping to get ULV back to the Final Four, Schary has propelled the Leopards out of the gate in 2004 with a 24-3 overall record and a 9-0 conference record.

“She has this light inside of her when it comes to volleyball,” Kratochvil said. “She has great instincts.”

Schary has prevented the Leopards from any letdowns from their great start.

“Tricia has dominated the second half of this season,” Flora said.

Schary has contributed much of her success to her coaches, players and her parents.

“My parents have supported me the whole time, paying for my club teams and everything,” Schary said. “My grandparents come to all of my games, my grandmother has all of my jerseys.”

Flora has also played a significant role in Schary’s success.

“My coaches have been awesome in helping me, especially Coach Flora,” Schary said. “I would have to say that my coach (Bill Lawler) at Cal State L.A. helped make me the player I am today also.”

Schary enjoys the personal accolades and the attention she receives from these, but knows that deep down she could never accomplish anything without the help of her teammates.

Schary is surrounded by an excellent senior class. Sara Lupu, Amanda Thomas, Jennifer Stout, Amy Kratochvil and Adele Jones are all seniors who have contributed an enormous amount to this season’s successes.

“I knew all of these girls from club even before I got here,” Schary said. “I love these girls.”

When Schary was asked what the best part about playing for ULV was, she said, “I get to play with a bunch of exceptionally talented girls every day. The best part is that I’m just a small piece to the puzzle that is La Verne volleyball.”

Steven Falls can be reaches at sfalls21@msn.com.