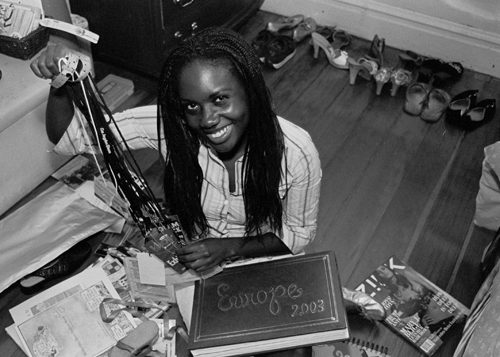 Junior Mercy Faith Kimbwala is experiencing her first year at the University of La Verne after transferring from the Fashion Institute of Design and Merchandising, where she received a degree in fashion marketing and footwear design. Kimbwala has worked on projects for domestic and foreign publications including Zink, Surface, Time Out London, FW Magazine and the MTV Movie Awards. / photo by Jenna Campbell

In addition to preparing for the opening of the Catwalk, which is due to open Nov. 20 in Downtown Los Angeles, Mercy Faith Kimbwala works as a personal shopper while attending the University.

Kimbwala is a business major with an emphasis in marketing and a minor in journalism at the University of La Verne. She is also a fashion stylist.

She has degrees from the Fashion Institute of Design and Merchandising in fashion marketing and footwear design. It is her fashion background that got her onto a design team that will be featured weekly in a new club called the Catwalk.

“At the club, we will pull some people aside for a couple of hours and do their hair and make-up. I will style their outfit,” Kimbwala said. “There will actually be a catwalk in the club where people we style will walk down, featuring our work.”

The style team will consist of two hair stylists, one makeup artist and one clothing stylist.

Kimbwala did not originally set off to be a stylist. Her first ambition was to get an education from the University.

“I applied for the University of La Verne as a CAPA student,” she said. “When they realized I wasn’t even 20, they said ‘sorry.’”

Kimbwala had to go to school somewhere, which is why she went to the Fashion Institute of Design and Merchandising.

“Mercy is a very driven person. She is especially talented and assertive,” said Belinda Haller, content manager at the Fashion Institute of Design and Merchandising.

At the fashion institute, Kimbwala entered the footwear design program.

“I joined the shoe program and completed it in nine months,” Kimbwala said.

While at the fashion institute, Kimbwala designed four pairs of shoes, three of which were made in Italy.

“I make the drawing, choose the material and the color and then from the information we send, they make the shoes,” she said.

Kimbwala went to Italy to see the outcome of her designs.

Kimbwala has put her fashion education to work. Her ultimate goal is to be a successful personal shopper.

“I expect her to go far as a stylist. She certainly has the will and the talent,” Haller said.

At one time, Kimbwala was one of Mariah Carey’s stylists.

As a personal stylist, Kimbwala sets up appointments with her client, charges a rate, determines a budget and shops.

“I have been a dresser for fashion shows,” she said. “Last May I did one with Tommy Hilfiger. He let me put some looks together, which designers don’t normally do.”

“I love being back stage because it’s crazy,” she said. “People are yelling and screaming. Take a camera back there and see how unglamorous it is.”

Even after working with prominent designers, Kimbwala prefers being a personal shopper. The major downfall to fashion shows is putting in 15 hours or more of work for a 10-minute show, Kimbwala said.

Michelle Loggia can be reached at msloggia@aol.com.