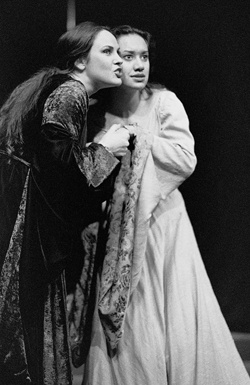 In the new Dailey Theatre production “Life’s a Dream,” after learning that she will soon marry Duke Astolfo of Muscovy, Estrella, played by Stephanie Barraco, shares the news with Rosaura, played by Samantha Chung. The news comes as a surprise because the marriage could spell the turnover of the kingdom to the duke and his new wife. / photo by Gloria Diaz

“The play’s main meaning is that life is far more than it seems to be,” said Anthony Guerrero, a junior theater major, who played Piper in the play.

After reading the script Guerrero actually didn’t want to be in the play because he didn’t like it. Paro wanted Guerrero to be a part of the play so he made some transformations on the role of Piper and talked Guerrero into doing it.

The play opened with Piper and Rosaura, played by Samantha Chung, stumbling upon Segismundo, played by Christopher Smith, in prison with chains around his ankles and wrists. Segismundo was the son of the King of Poland, played by Phil Hofer, and was predestined to destroy the kingdom. The King was ready to pass on his crown but couldn’t decide between his son or his nephew Astolfo and his niece Estrella played by James Darrah and Stephanie Barraco.

Segismundo was brought from his prison to be given a chance at ruling but it was put into the context that it was just a dream.

While Segismundo was “dreaming” of power Rosaura was trying to avenge her honor that Astolfo had taken from her.

The Kingdom of Poland became divided over both the struggle for the throne and for personal honor. Even throughout this revolution there was always the question of what is dream and what is reality? 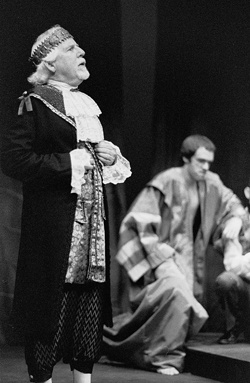 Asking why heaven allowed him to give life to Segismundo, played by Chris Smith, who was declared heir to the throne, Basilio, King of Poland, played by International and Study Abroad Center Director Phil Hofer, says that his son is a proud and haughty man. “Life’s a Dream,” a production written by Pedro Calderon de la Barca and directed by Georgij Paro, ends this Sunday. Paro is also the University’s senior adjunct professor of theater arts. / photo by Gloria Diaz

“Life’s a Dream” filled about 50 seats of the Dailey Theatre on opening night. Sarah Morales, a senior music major, was in one of them.

“The play put life into perspective and you cannot just look at the trivial things,” Morales said. “The cast really put in a group effort and I really loved the costumes and lighting.”

The set had one central object. It was a throne that was raised and lowered on a spear throughout the production.

When the throne was up and Segismundo was under it, it meant that he was beneath the power and underneath the throne. When it was down and capable of sitting in, it transformed the stage into the royal court and it represented power to Segismundo.

Lighting was another aspect that helped transform the stage. The background lighting represented the state of mind that the characters were in. Red portrayed war while blue showed the presence of a dream.

Since Paro is an adjunct professor here at ULV, the cast was all looking forward to working with him because some had never worked with such a renowned director before.

“I loved being challenged by Georgij,” said James Darrah, a junior theater and music major who played Astolfo. “He is so precise and it was hard doing it that way and being comfortable with it and giving my role more life.”

The play is not finished and will be performed tonight and tomorrow night starting at 7:30 and on Sunday at 2 p.m.