By Christine Moitoso, Jenna Campbell on March 18, 2005 in News 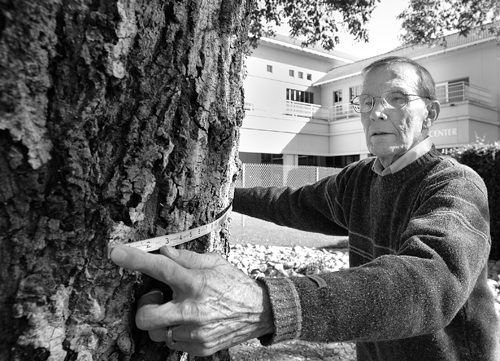 Measuring the circumference of the largest coast oak on campus, Professor of Biology Robert Neher, hopes the tree will stabilize following the removal of its neighboring falling oak. “The rains were more than these trees could bear,” he said. A fence was positioned around the perimeter to “protect people from the danger of the tree branch missiles,” Neher said. The fence will remain for awhile for safety purposes. The tree was planted in memory of Donald F. Gaston, who died Nov. 26, 1918, in World War I. / photo by Jenna Campbell

Sneaky Park lost one of its two oak trees last month thanks to recent record rainfall that soaked the surrounding soil.

“The ground was too moist and it became saturated with all the rainfall we had,” said Bob Neher, professor of biology.

The weight of the tree was more than the roots could support, it had to be cut down,” he said, adding “We wanted to try and save the second tree.”

The oak tree that fell was planted in memory of a La Verne student who had died in World War I.

Worley said that as soon as he discovered the tree was leaning, he began meeting with city officials to discuss the situation.

The second oak tree in Sneaky Park was starting to fall as well, but officials did their best to balance it by removing branches so that it is less likely to fall if heavy rains or winds kick up. The area around the remaining oak is currently surrounded by wire fencing.

“We are going to leave the safety zone up until summer,” Worley said. “We want to be safe and don’t want to have any accidents.”

Unfortunately, the second oak in Sneaky Park is not the only tree in danger.

Two oaks in front of Miller Hall are being examined as well. All the moisture is causing insect infestation and rotting the roots.

Neher said oak trees are used to dry land where their watering comes from infrequent rainfall.

“We always water the trees on top of what the rain brings, but we are trying to cut down,” Neher said. “The roots need to breathe and right now they are stressed from all of the watering.”

The loss of the first big oak saddened some on campus.

“Those were the two nicest trees on campus,” Neher said. “If both of them are gone it is going to look different and be one big open space.”

“But I didn’t really notice much of a difference because it was the tree farthest from us (at Wilson Library),” he added. “Now if we lost the other tree it would totally change the character of the park and it would be really devastating.”

If the second tree falls, school officials will have to evaluate whether they are going to plant more trees, build something else or just leave open space.

Worley said that the problem with the two trees in Sneaky Park was that they were planted too close together.

He said the University will not plant another tree in place of the one that recently fell.

Guessing that the age of the tree was around 100 years old, Neher took a piece of the tree, and when he gets a chance he will count the rings to get an exact age.